How will YAIAA wrestlers fare at state tourney?

How will YAIAA wrestlers fare at state tourney?

What a difference a year makes. Last year on the first day of the PIAA tournament it snowed about 5-6 inches. This year? Oh, only 75 degrees and sunny.

With that being said, it sure doesn’t feel like it’s time to head inside Giant Center to watch some wrestling.

With the PIAA tournament set to begin Thursday at 9 a.m. let’s take a look at how YAIAA wrestlers matchup, as well as a projected finish, beginning with Class AAA.

106 – Dalton Rohrbaugh, Spring Grove (39-1): The Rockets sophomore comes in off a victory in the District 3 tournament two weeks ago and will meet either Stroudsburg’s Cameron Enriquez or Wilson’s Brandon Connor in the first round. After that he’ll meet either Penn Trafford’s Job Chishko (30-2) or Souderton’s Tyler Williams (29-3). Chishko is ranked No. 5 in the state while Rohrbaugh enters the tournament at No. 6. Should be a great quarterfinal matchup pending both are victorious. Projected finish: Fifth place. 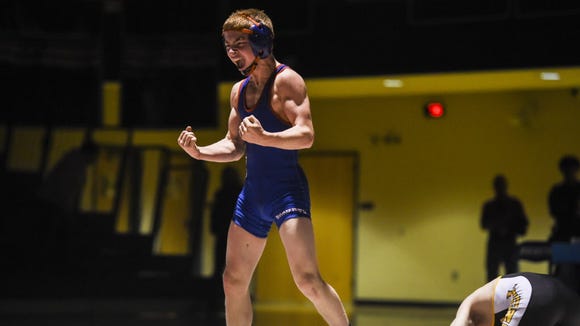 113 – Brandon Rodriguez, Dover (25-5): The Eagles senior reached the 100-win mark two weeks ago at the District 3 Championships and will meet Council Rock North’s Aidan Burke in the preliminary round. Burke is the No. 6-ranked wrestler in state while Rodriguez enters the tournament 14th. Tough opening matchup. Projected finish: Off the medal stand.

120 – Zurich Storm, New Oxford (24-1): The draw was not very kind to the Colonial junior as he draws returning state qualifier Matt Marino of Garnet Valley in the first round. A victory would then likely have Storm see Franklin Regional’s two-time PIAA champ and career unbeaten Spencer Lee (105-0). The weight class features 13 returning state qualifiers. If he loses his match with Marino he’ll be hard pressed to medal, as he’d meet the loser of Liberty’s Kj Fenstermacher and Exeter’s Austin DeSanto in a win-and-medal or lose-and-go-home match. A win over Marino should allow him to medal. Projected finish: Fourth place.

126 – Michael Bracey, Kennard-Dale (30-2): After an undefeated regular season, Bracey suffered his first two losses of the season in the District 3 tournament, placing fifth. He’ll meet North Allegheny’s Luke Landefeld (15-2) in the first round. The winner will meet Bethlehem Catholic’s two-time defending PIAA champ, Luke Karam in the first round. Projected finish: Off the medal stand.

138 – Owen Wherley, South Western (33-2): In quite possibly the most loaded bracket in the tournament, with 11 of the 20 wrestlers having five or fewer losses, Wherley faces a tough road. He’ll likely meet Ringgold’s Doug Gudenburr (36-5) in the first round and with a win could face Easton senior Evan Fidelibus (40-3) in the quarterfinals. Wherley would have an inside track to reach the final should he defeat Fidelibus, however, as a semifinal against Council Rock South’s Riley Palmer (39-3) is winnable. Projected finish: Fifth place.

145 – Dylan Chatterton, Central York (34-2): The Panthers senior enters his fourth PIAA tournament and is looking for his first medal since a fifth-place finish as a freshman. Chatterton opens with Dieruff’s Ronald Nguyen and with a win would meet state No. 2 Brock Porte of Bellefonte. A tough matchup between kids with a combined record entering the tournament of 68-3. Projected finish: Fourth place.

152 – Gage Thomas, South Western (31-6): The Mustangs senior enters with 99 wins and will look for win No. 100 in his first round bout with Tunkhannock senior Mike Manley (41-10). A win would propel him to a first-round matchup with Belle Vernon senior Derek Verkleeren. Thomas has the ability to pull off that upset. Projected finish: Off the medal stand.

152 – Nolan Poust, New Oxford (34-6): Poust opens with a tough matchup against Bethlehem Catholic’s Cole Karam, the No. 5 ranked wrestler in the state. After a great run two weeks ago to fourth place in District 3, the run for Poust could fall short of a medal. Projected finish: Off the medal stand.

195 – Bryce Shields, Dallastown (29-3): Talk about a tough draw. The Wildcats junior drew LaSalle senior Anthony Piscopo (28-3) in the preliminary round with the winner getting undefeated Norwin senior Drew Phipps (38-0). Very tough road for Shields. Projected finish: Off the medal stand.

285 – Michael Wolfgram, Central York (29-10): Wolfgram is one of two freshman in the field, joining Cathedral Prep’s Kawaun DeBoe. The young Panther will meet Dieruff senior Shai Hines (35-5) in the first round. A win would propel him to a match with YAIAA foe Blaine Yinger of Northeastern. It’s a tough road for the freshman in an “older weight.” Projected finish: Off the medal stand.

285 – Blaine Yinger, Northeastern (33-3): As two weeks ago proved, Yinger, a junior, can sure grind out victories. He will need that as he’ll meet either Wolfgram or Hines in the first round matchup. A victory would have him likely meet up with Neshaminy senior Bruce Graeber (34-2). Projected finish: Seventh place.

With the AAA portion complete, lets preview the AA locals:

106 – Landon West, Bermudian Springs (35-10): The sophomore comes into the tournament as the 6th seed out of the Southeast Regional and will meet Penn Cambria junior Chase Proudfit (28-13) in the first round. The winner of that bout will get Southeast regional champ Kevan Gentile out of Jim Thorpe. Projected finish: Off the medal stand.

120 – Austin Clabaugh, Bermudian Springs (35-5): The Eagles junior comes in with 107 career wins after finishing fourth in the brutal Southeast regional field, losing to Saucon Valley’s Jack Hill (No. 2 in the state) and Boiling Springs’ Jalin Hankerson (No. 7). Clabaugh avoids all of those wrestlers until the semifinal where he could meet Hill again. Clabaugh opens with Burrell’s Trent Bechtold (30-18) with the winner getting Lewisburg’s Jordan Gessner (38-3, No. 6 in the state). Projected finish: Sixth place.

126 – Caleb Garland, Hanover (36-6): A late addition to the tournament after a Southeast regional wrestler couldn’t compete due to injury, Garland, a senior, gets a final chance for a state medal. He’ll enter in and face Ellwood City junior Tyler Alberts (32-6) in the preliminary round. A victory would propel him into a match with Saucon Valley’s Jonah Zych. Projected finish: Off the medal stand.

145 – Ashton West, Bermudian Springs (35-12): The Eagles junior finished fourth in the Southeast regional and will meet the sixth-place finisher from the Southwest, Austin Hemminger of Somerset (29-9). The winner of that match will get undefeated James Duffy of Smethport, the No. 2-ranked wrestler in the state. Tough sledding early on for West. Projected finish: Off the medal stand.

152 – Nate Newberry, Biglerville (36-2): The Canner senior drew the top spot in the tournament and will meet either Coudersport’s Gage Arnold or Chestnut Ridge’s Morgan Deremer in the first round. Newberry enters with 143 career wins and ranked No. 3 in the state at his weight. A semifinal clash with No. 2 Shae Bloom of Curwensville should be his only roadblock to reaching the final. Projected finish: Third place.

152 – Brian Shermeyer, Delone Catholic (33-8): The Squires junior will face Brookville sophomore Caleb Hetrick in a first round matchup with the winner likely getting state No. 4 Zach Fry of Hughesville. Shermeyer comes in ranked 11th in the state. Projected finish: Eighth place.

170 – Dakota Mackley, Eastern York (28-3): After a runner-up finish at the District 3 tournament, Mackley rebounded to win the Southeast regional crown. His reward is a bye and then either Sullivan County’s Dylan Ammerman or Burrell’s Anthony Marra. A victory there would propel him to a quarterfinal battle with Beth-Center’s Anthony Welsh (35-1, No. 2 in the state). Projected finish: Seventh place.

170 – Noah Fleshman, Bermudian Springs (37-7): Fleshman opens with a battle against Milton senior Brandon Stokes (34-7). The winner gets top-seeded Anthony Walters of Westmont-Hilltop. Tough sledding early for the Eagle. Based on my scratching of the bracket, could very well see the junior compete against Dakota Mackley in a consolation bout where the winner would qualify for the medal stand. Projected finish: Off the medal stand.

195 – Logan Luckenbaugh, Bermudian Springs (35-11): A great postseason run for the Eagles senior placed him into a match with Lackawanna Trail senior Trent Phillips (35-5). Despite Phillips' gaudy record, it’s a winnable match for Luckenbaugh. Should he win, he’ll meet the top-seed Blake Reynolds of Greenville (43-0). A win for the Eagle at states would be an incredible accomplishment to cap off his career. Projected finish: Off the medal stand.

Stay tuned to GameTimePA.com and follow me on twitter @ameaseYDR for updates from the Giant Center all weekend. Wrestling begins Thursday at 9 a.m.