This week marks what is perhaps the biggest test for Bermudian Springs and its No. 1-ranked defense in the YAIAA. The... 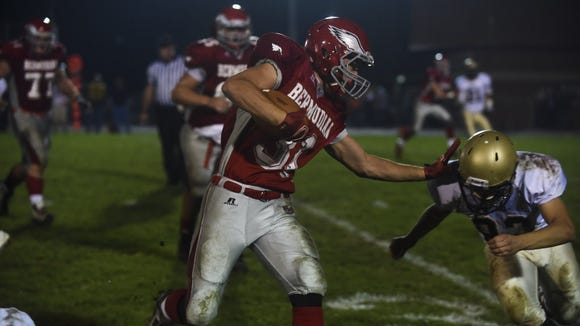 This week marks what is perhaps the biggest test for Bermudian Springs and its No. 1-ranked defense in the YAIAA. The Eagles travel to York Catholic and face an Irish team that can pass as well as it can run, led by quarterback Hakeem Kinard.

Will Bermudian Springs remain atop our YAIAA football power rankings? For now, let's break down where they all stand:

1. Bermudian Springs (7-0, last week: 1) -- The Eagles' latest challenge came against a Delone Catholic team with a proven offense. What did Bermudian do? Just hold the Squires to 65 yards of total offense. The opposition this week, York Catholic (5-2, 4-0 YAIAA Division III) is coming off one of its most offensive prolific games this season. Just like a week ago, York Catholic is ranked No. 1 in the District 3 Class A playoff rankings. Bermudian is second in Class AA, sandwiched between fellow undefeateds Berks Catholic and Wyomissing.

3. West York (6-1, lw: 3) -- The Bulldogs are cruising. They have vaulted into the No. 2 spot of the District 3 Class AAA playoff rankings, trailing only Bishop McDevitt. Following their 58-7 win against York Suburban last week, they have Susquehannock on Friday. Then comes Dover and Gettysburg to close the regular season and decide the YAIAA Division II title.

4. Gettysburg (6-1, lw: 4) -- After dropping its YAIAA opener at Dover, coach Matt Heiser's Warriors keep marching along. If they get by the next two weeks, they have Ron Miller's West York Bulldogs at home in Week 10. It could decide at least a share of the Division II title.

5. Central York (4-3, lw: 6) -- A four-game winning streak has Central skyrocketing into YAIAA Division I title contention. The Panthers host Red Lion on Friday, then play Dallastown and William Penn to close the regular season. They are currently 15th in the District 3 Class AAAA rankings, just ahead of No. 16 Red Lion.