Despite the fact that the pair are fierce competitors, Chambersburg's Kelton Chastulik and Greencastle-Antrim's Campbell Parker have what some people like to call a "bromance."

Despite being competitors on the field, Chambersburg's Kelton Chastulik and Greencastle's Campbell Parker cheer each other on during events

Despite the fact that the pair are fierce competitors, Chambersburg's Kelton Chastulik and Greencastle-Antrim's Campbell Parker have what some people like to call a "bromance."

During each throw of the discus and shot put at the Tim Cook Invitational on Saturday, the two could be seen cheering each other on. 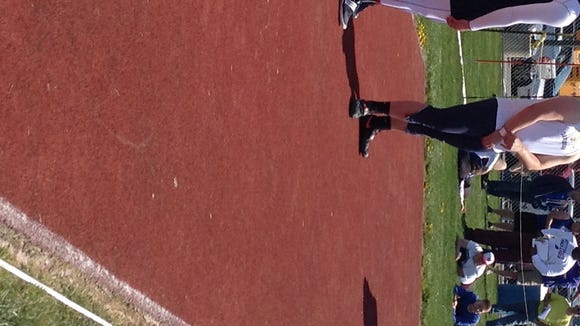 "Break that record!" Chastulik says to Parker during the discus. Or "come on, Kelton, you got this!" is a frequent saying of Parker's.

The two may be pitted against each other on the field, but off it?

"We have a really good relationship," Parker said. "We're both good friends, and we never get too serious during competitions."

They were both obviously happy when the other did well, and shared in the frustration on their opponent's scratch or sector foul. And here's why:

"We keep each other going," Chastulik said. "I see the area leaders, and he's (first in the) discus and I'm (first in) shot put. We keep going against each other. It's great to have someone in the area throwing as far as I am. It pushes me, so it's really nice."

Heading into Saturday's meet, Parker was seeded second in the shot put, behind only Chastulik, and in the discus, Chastulik was No. 2 to Parker's No. 1.

Check out the best field events from the annual Tim Cook Invitational.

Despite the results, the pair will be right there with each other in the next meet, cheering each other on.

"Kelton and I have known each other since freshman year," Parker said. "Being in the same year from the same area, throwing about the same distances is awesome. If I'm ever up here in Chambersburg to lift, I'll ask Kelton to throw with me."