Team chemistry is a must

Team chemistry is a must

A team can have all the talent in the world, but if it doesn't understand what the word "team" really entails, it's going to struggle.

I recently wrote a column about how Chambersburg boys basketball coach Shawn Shreffler helped the Trojans to once again understand the meaning of the word "team," and how that has translated into success on the court.

That team closeness and bonding can't be replaced, and after interviewing a number of Chambersburg softball players, it seems they have also taken that message to heart.

"My freshman, sophomore and junior years, it was more like fend for yourself," Trojan senior Tara Harmon said. "This year, we've been together for all these months already, and I feel like I've received 31 more sisters. It's pretty awesome. Even the coaches are bonding with us." 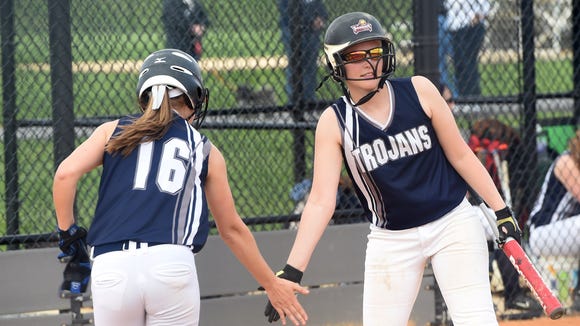 It's not always easy to bond as a team, though. It takes time and work. Chambersburg has made it a point to plan team activities, such as spaghetti dinners and regular open gyms. The Trojans also planned a surprise for one of their teammates by going to her band concert as a team earlier this week.

They have also made it a point to keep their attitudes positive and keep problems internal.

"Last year, we were definitely thrown off a lot," Chambersburg pitcher Sam Bender said. "There was a lot of parent involvement, but this year, we're keeping it a team thing. We've been doing a lot of team bonding and have set some guidelines for our team. (Chambersburg coach Chris Skultety) respects us as much as he expects us to respect him, and we get along so well this year."

Pitching staff a plus for Chambersburg softball

Speaking from experience, being on a high school girls sports team is not the easiest thing in the world. There's an inherent air of competitiveness and the occasional catty situation. But bonding as a team can solve a lot of those problems.

Moreover, it creates experiences these girls will never forget. I still remember to this day a sleepover that involved late-night golf course antics with my high school volleyball team.

"We harp on the journey and enjoying every day," Skultety said. "We're trying to build team camaraderie, and they're buying in and holding each other accountable. That's great, because it's their team. I'm just going to teach them the small things and guide them, but it's ultimately their team."

They definitely should enjoy it while they have the chance.