A tribute to a few unsung heroes

Many athletes from around the area are contributing in big ways

A tribute to a few unsung heroes

Everyone knows about the stars and the standouts.

Top scorers and tough defenders are talked about and endlessly discussed.

But there's quite a few players from around the area who are just as worthy of the recognition, so here's a tribute to a few local unsung heroes.

Shippensburg boasts one of the top players in the area in Wade Mills. He is averaging a double-double and is known for his timely dunks and fierce work on the boards.

But if you're looking for an impressive guard, look no further than Carter Van Scyoc. 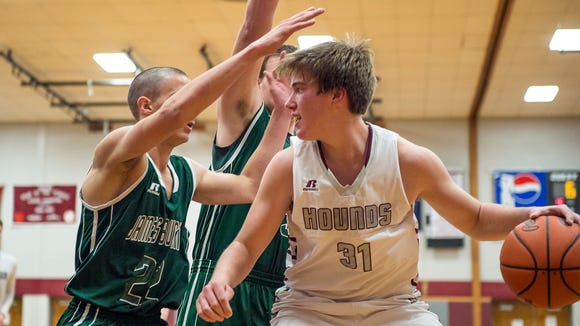 The Greyhound sophomore is averaging just under 10 points per game and has become a mainstay in Ship's starting lineup.

Another team with an unsung hero is Shalom Christian, which is currently 13-4 and has had winning streaks of six and four games this year. Jonah Stains is averaging more than 20 points per game and has held down the second spot in area leaders for almost the entire season, but he's not the only cog in the Flames' success.

Cameron Roseman, also just a sophomore, has finished in double figures in all but three games this season. He has been clutch from behind the arc, scoring 27 3-pointers this season, including a game-winning longball against Md. School for the Deaf.

One player I was very impressed with while covering Forbes Road on Friday was forward Matt Brown. Like Van Scyoc, he is averaging just under double figures with 9.6 ppg, and he has been a consistent force on the boards. Standing at 6-foot-1, he also has done quite some work for the Cardinals on the perimeter and banged a key 3-pointer in a comeback victory over Fannett-Metal.

Finally, I recently wrote about Waynesboro being on the upswing. 'Boro boys are on the rise

While there are several factors in the Indians' recent success, guard Kyle Hoffman has been especially key. He scored a career-high 19 points in a big win over Northern York, and after averaging just 3.5 ppg a year ago, he is scoring more than double that this season.

I'm sure there are more key players in the area, but those are a few recent standouts in my mind, and because there's no "I" in team, it's important to take time to notice the sometimes less-glorified players.