When the Dover and Delone Catholic boys' lacrosse teams have taken the field this spring, it hasn't really been about wins and loses. 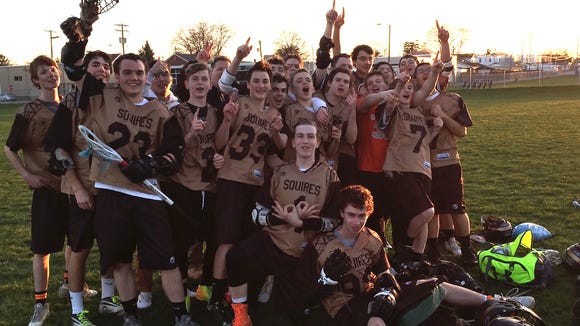 When the Dover and Delone Catholic boys' lacrosse teams have taken the field this spring, it hasn't really been about wins and loses.

The Squires launched their program last spring, and the Eagles just started this season. Not only are both teams competing against a JV schedule, they're currently focused on teaching their players the game and creating a positive culture instead of winning.

But Monday will provide the two teams with a unique opportunity, when they play each other at 4:15 p.m. at Dover. While the game will have no implications on the league standings, it will give the two teams a chance to measure themselves against an opponent in a similar situation.

Not only are both programs new, they will both be making the jump to varsity in the YAIAA next season. For the seniors on both teams, Monday's game is likely the closest thing to a varsity atmosphere that they will get to experience in high school.

That doesn't mean either team will treat Monday's game as a win-at-all-costs type of situation. While the Squires and Eagles know it may be a while before either become a competitive varsity team, both are still just happy to have the opportunity to play lacrosse.

"I'm hoping we can grow our club program to continue our success at the high school level," Dover head coach Jeff Barker said recently. "The sport of lacrosse is a brotherhood that stays with you forever. The love for the game never goes away."

Delone will be looking for its second win of the season, having beaten West York's JV team on March 29. Dover has won twice this season, against Central Dauphin East and Kennard-Dale.