Only one woman holds the top management position throughout all the high schools in the YAIAA. 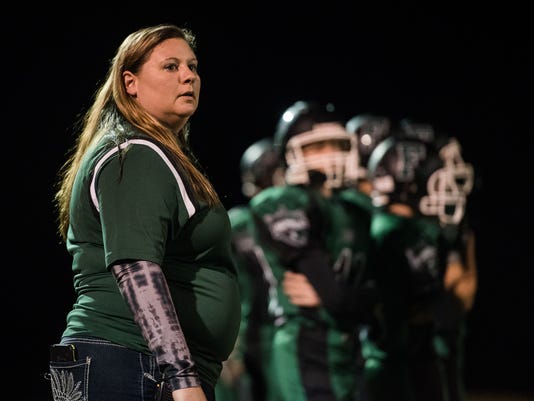 Take all the athletes in the York Adams Interscholastic Athletic Association and put them in a room. Ask the boys to stand on one side and the girls to stand on the other. You'll see roughly the same number of athletes on each side of the room.

Now put all the athletic directors in the YAIAA into that same room. Ask them to separate in the same manner.

There are 22 men on one side, and just one woman — Crystal Heller — on the other. Heller works at Fairfield in Adams County, the league's smallest school, and has been the league's only female athletic director since 2009.

Throughout District 3, that ratio doesn't get much higher. Lampeter-Strasburg Athletic Director Branden Lippy has headed the Pioneers' athletic program for more than five years. Every year when all of the district's athletic directors get together, she notices that she and her female counterparts are outnumbered by men by about five to one, if not more.

Lippy is one of three female athletic directors in the 23-school Lancaster-Lebanon League. All three work in Lancaster County.

In the Mid Penn Conference, three of the 28 District 3 athletic programs in the conference are headed by women.

In York County, there isn’t a single woman leading any of the county's 16 public school athletic programs.

“If you look at our political system, when African Americans got the right to vote, things changed within our political system. When females got the right to vote, things changed,” said West York athletic director Frank Hawkins, one of two black athletic directors in York County. "Now just think if we applied that to our public schools and our athletic systems. If we were more diverse, it would create a better atmosphere for our student-athletes, and we would represent them in a better fashion."

Added Kaelyn Long, New Oxford field hockey and basketball player: “From a female student perspective, it would be nice to have someone I could relate to better. That’s not to say male athletic directors aren’t easy to relate to, but having that female perspective might be a little different, especially for female athletes.”

In an age when teenage girls and boys participate equally in high school sports, why hasn't that balance spread to the top of the area's high school athletic programs?

One element at play is that, for decades, athletic director positions have largely been held by men. Many Pennsylvania high schools didn't even have athletic programs for girls until the 1960s and 1970s.

"Historically, the athletic director position has been male-dominated. It’s a gender ideology," Lippy said. "People expect athletic directors to be male, it's a societal predetermination. Just like people expect elementary school teaching positions to be held by women."

That gender ideology, the idea that women are not supposed to go into athletic administration, could be keeping young women from taking an interest in the industry, said Dr. Justin Wartella, an assistant professor of athletic administration at Lock Haven University. In his classes of 30 to 35 students, he typically has about four or five women, he said. 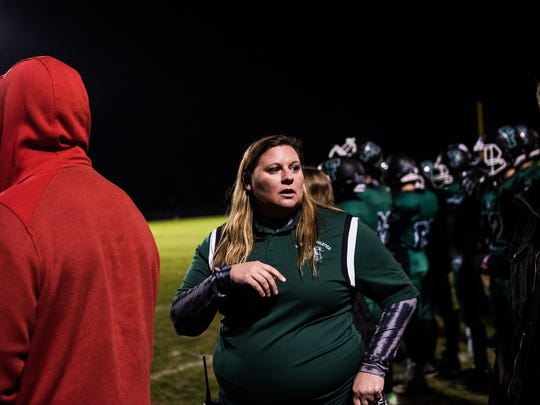 There's also another gender ideology at play that could be deterring women from seeking athletic director jobs.

"The female often ends up having the role of the nurturer in the home and sometimes have after-school activities with their own children," Elizabethtown Athletic Director Linda Ahern said. "You really have to be able to be here in the afternoon and evening at events. It does monopolize your evening time, and if you have a family, that can be difficult.”

Ahern, Heller and Lippy all noted the importance of serving as role models for young women in athletics who may want to be athletic directors one day. They both said they've been approached by several female students in recent years asking to intern or discuss a future in athletic administration.

Seeing women in these positions isn't just about athletics. It's the fact that young girls, in many facets of life, don't see women in positions of authority or power very often. Most leaders in business and government are men. But seeing women breaking the mold in the athletic world shows young girls that men aren't the only people who can hold leadership positions, Lippy said.

“I equate it to Hillary Clinton running for president. For young girls, just seeing her running makes them think, ‘Why can’t I do that?’” Lippy said.  “If girls have only ever seen a man in that position, they have nothing to go off of other than, ‘Oh, that’s a leadership position, so that's a man’s position.’ That’s the old way of thinking. The new way of thinking is to see women in those leadership roles.”

Lippy got started in athletic administration at the college level, where many more opportunities are available for both men and women. She spent time at St. Bonaventure University and the University of Maryland before transitioning to the high school level.

"Almost every professor I had in college said it was easier for a woman to become an athletic director in a college or university setting than it would be at a high school," Heller said. "An athletic director either has to be fired or has to retire in order to open a position. I knew it was a long shot.”

That discrepancy exists because many colleges and universities have several assistant athletic directors overseeing varying aspects of the department, which makes for more opportunities for men and women alike to move up the ladder than at the high school level, Wartella said.

"There’s still something to sports, especially local sports, being a good-old boy, male-dominated society," Wartella said. "People in college may also be more aggressive and open and up-to-date with the times."

High school athletic positions also aren't as likely to go to the most-qualified applicants, Wartella said. Those positions, especially in small towns, often go to recognizable males in the community such as a former football or boys' basketball coach. 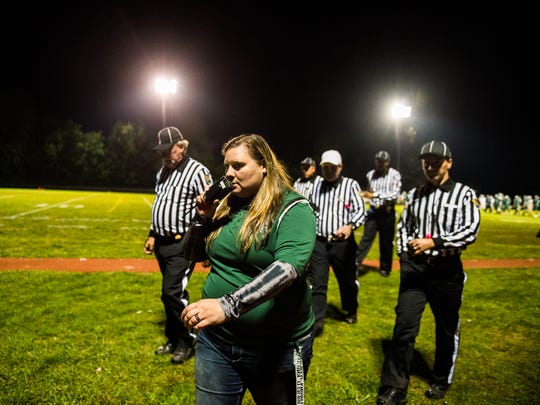 Fairfield athletic director Crystal Heller guides the PIAA officials off the field at the end of Fairfield High School's Friday night football game against York County Tech on Oct. 14, 2016 in Adams County. Heller is the only female high school athletic director in all of York and Adams Counties. (Photo: Shane Dunlap, GameTimePA)

Speaking of football, it's the one sport that consumes most of an athletic directors' time.

It's also one of the only sports that, aside from rare cases, girls do not play.

“There’s a perception that, ‘You never played football, so how do you know how to run a successful football program?’” Lippy said. "I've had someone say that to me. But a woman can still be a passionate leader. I’m still able to strategize and communicate with football coaches to get us to a level that we are successful. It’s more of a manager position.”

To her point, the Pioneers football team went 40-19 the last five years and is off to another good start this year.

Women have also made strides at other levels of football. The NFL hired its first female referee last year, and the Buffalo Bills hired a female position coach in January.

“You don’t usually think of women being part of football, but you’re seeing more of them in football broadcasts,” New Oxford field hockey and basketball player Kaelyn Long said. “You used to not see that as much. If you have that in the media and broadcasting world, you'd expect to see it (in athletic administration) too.”

“You’ll always (find) football as that dominant sport," she said. "But having a female athletic director would bring a little bit of a different perspective. She might have new ideas for a sport like field hockey that she played, and maybe her experience would bring new ideas to that sport that a man might not have.”