With so few teams returning a starting quarterback from last season, Monday's YAIAA Football Media Day at the York Daily Record/Sunday News brought some clarity as to which players will be leading the league's offenses this spring.

The Northeastern Bobcats vs. South Western Mustangs compete in trivia from the 1990's during the High School Football Media Day.

With so few teams returning a starting quarterback from last season, Monday's YAIAA Football Media Day at the York Daily Record/Sunday News brought some clarity as to which players will be leading the league's offenses this spring.

Northeastern, Spring Grove, York Catholic and Fairfield affirmed that last year's starters Shannon Valenti, Jake Messersmith, Dan Yokemick and Darian Mort will continue in those roles. Bermudian Springs confirmed that sophomore Chase Dull, who started a few games last season before tearing his ACL, will be the opening-day starter this year. Pretty much everyone else, though, turns to new faces.

In Division I, Sam Emig moves into the starting role for Red Lion, while Dallastown and South Western are waiting to see how competition battles in camp play out. Tanner Miller will be the starter for New Oxford.

In Division II, Gettysburg turns to Josh Clapsaddle and West York turns to senior Anton Johnson, who started the year at the bottom of the depth chart.

"We started quarterback stuff in February after the Super Bowl and I told (Anton) after the first workout he was probably at the bottom of the depth chart," Bulldogs coach Jeremy Jones said. "But he continued to work and work and work, and he got himself to the top... That's compliments to him. He worked for it and he's deserved it."

In Division III, Cam Mumma and Tanner Noble were named the starting quarterbacks for Hanover and Littlestown, respectively. Biglerville waits to see how a three-player position battle turns out.

YAIAA division II athletes from the York Suburban Trojans and the Eastern York Golden Knights face off in the William Tell challenge.

New Oxford home opener will be sight to see: New Oxford will wear new helmets this year, and first-year Colonials coach Greg Bowman made several changes to the way the team prepares in the offseason preparation. But the biggest change he's bringing might be the changes to the game atmosphere.

Bowman revealed that the Colonials home opener — Week 3 against Delone Catholic — could feature food trucks in the parking lot before the game, and trinkets such as pom-poms given to fans in the stands. Oh, and maybe fireworks when the players run onto the field.

“The boosters have a lot of stuff in mind," he said. "I mentioned at an early boosters meeting how amazing it was at Northern a year ago when the kids ran onto the field to fireworks. That’s one of the things in the works.”

The Colonials haven't player the Squires in several years, so this game will also renew a rivalry that goes back multiple generations. Delone Catholic is situated right inside the Conewago Valley School District, and New Oxford running back Brock Crawford said he believes the rivalry hasn't lost any juice over the years. Dedone Catholic players agreed.

“I’m definitely excited," Squires' quarterback Brian Shermeyer said. "I used to go there, so I know all of those guys. I think it’s gonna be a lot of fun to play that crosstown rivalry.”

The game takes place on Sept. 16, just before the teams start divisional play.

“We’ve got a really good boosters organization and I don’t think they’re gonna slack on anything for that home opener," Bowman said. "My hope is that we give them a reason to continue to be excited and that those types of things will become a standard at New Oxford football games.”

Coaching changes means changes in team philosophies: Speaking of new coaches, with several new faces joining the coaching ranks in the YAIAA there will be some changes to team gameplans and philosophies heading into the 2016 season.

The change at head coach means a change for the team culture at Kennard-Dale. Grube wants to create a family atmosphere within the football program to help strengthen ties between the players and make the program more successful.

“The most important asset to developing a great football team is creating that sense of family,” Grube said. “If we can do that I think we have good things coming, but it’s going to take time.”

Over at Eastern, Jeff Mesich is planning a more tactical change for the 2016 campaign. Eastern has been known as a strong running team in the past, but the new Golden Knights’ coach wants to be a bit more diverse in their approach.

“Be a little bit more consistent in the passing game,” Mesich said. “Not give up big plays in the passing game on defense and hopefully, depending on what we run into each week, we’ll be able to be prepared to go forward with it. If we get into a situation where we can’t throw the ball and we need to run, we want to be able to run. If we get into a situation where we can’t run and we have to throw, you can’t just come up with that that week or that game. It has to be something you’re prepared to do.”

YAIAA athletes compete against GameTimePA.com reporters in feats of strength.

While games don’t start until the fall, players dedicate the months leading up to the season to improve their strength and conditioning. But a few teams have changed how players spend their time in the weight room this summer.

After consecutive down seasons, Littlestown brought in strength coach James Carsey of the Institute of Athletic Development in York Springs to work with the Bolts. According to head coach Mike Lippy, Carsey runs players through a series of different workouts designed to improve their stamina and prevent injury.

Lippy said while it wasn’t easy for him to bring in someone new, it was something he felt was necessary.

“I’ve been doing it for 20 years, and it was always hard for me to turn that responsibility over to somebody else,” Lippy said. “But I felt it was time. (Carsey) came in and did some different things that were very beneficial. Just something to switch things up.”

Other teams kept the same program in place but altered how players approached it. Gettysburg has encouraged teamwork and competition in the weight room, something that head coach Matt Heiser said was absent in past summers.

“I’ve seen a lot more of getting that team chemistry, that family environment going on,” Heiser said. “It’s got me all fired up, my hair standing up, and I’ve started getting hype myself.

“Because you can see guys challenging each other. When guys are trying to do a big lift, the whole room stops to cheer them on. It’s just a little bit of a different atmosphere this year.” 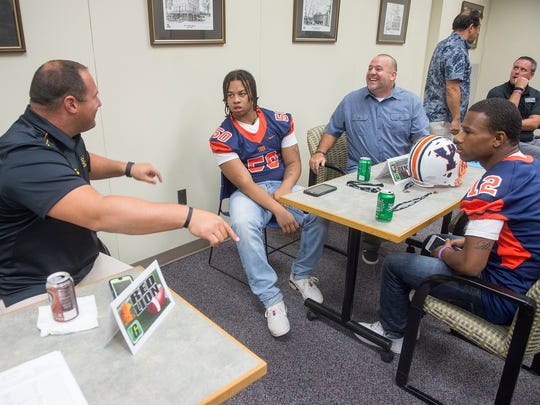