Getting off to a good start is a priority for any high school football team, but it will be especially so for the Elco football team in 2016.

The L-L guys are back to break down the interesting landscape in Section Three as the 2016 high school football season approaches.

Getting off to a good start is a priority for any high school football team, but it will be especially so for the Elco football team in 2016.

Last season, the Raiders stumbled to an 0-3 start, and although they righted their ship nicely by winning five of their last seven to finish at .500, the rough beginning to the campaign ultimately cost them a shot at the district playoffs.

Elco will look for a better start this time around with a bit of a new look after the graduation of quarterback Jeff Martin and his prolific passing numbers, go-to receiver Andrew Olson and a good chunk of its offensive line.

That's the bad news. The good news is Elco will be able to rely on workhorse senior running back Tyler Horst, the top returning rusher in the Lancaster-Lebanon League and new QB Kyle Knight in its bid for a more successful 2016 campaign

"We want to get off on the right foot. It's pretty important," Elco coach Bob Miller said. "I think once we got into section play last year we did well, but I'd rather come in a little hotter than 0-3."

"Come together as a team and go from there," Miller added, of how the Raiders can accomplish a better start. "As soon as we come together and have each other's backs on the field, then the success will come. If we come together right away, chances are we'll have a better outcome to those non-league games."

Another obvious key will be getting production and good health from Horst, a bruising 6-foot-1, 215-pounder who rushed for 1,345 yards and piled up 17 total touchdowns last season, and Knight, who tore his ACL in Week Three last season and missed the remainder of 2015.

Knight, in particular, will be important as he looks to replace the prolific pocket passing of Jeff Martin, now playing college ball at Kutztown, with a more versatile, dynamic style.

"He's shorter," Miller quipped of the difference between Knight and Martin. "Kyle understands the offense, he understands reading defenses. He can run the ball a little more than Jeff was able to with his speed. That's something that's been a blessing, to have him be able to do both and pick up where Jeff left off. The biggest difference is I think you'll see a little bit more quarterback runs. Other than that I don't think you'll see a whole lot changing. It's not like we're not gonna be able to throw the ball."

Horst and Knight will be joined on offense by fullback Cole Miller, receivers Nate Beamer and Cory Kline and tight end Ryan Eshleman, as well as up front by a line anchored by seniors Billy Petruska-Rhoades and Dylan Hill and junior Travis Weaver. 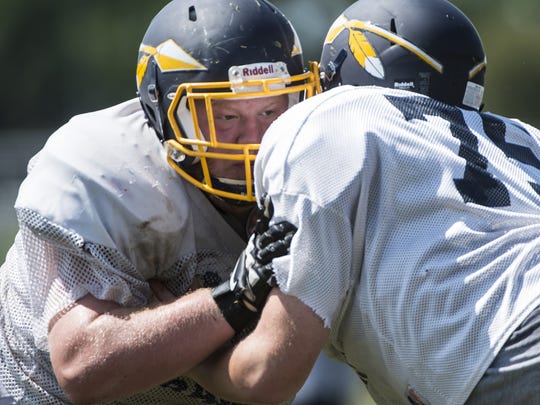 Defensively, the strength of the group will be at linebacker, where Horst, Knight, Miller and Beamer will set up shop. On the line, Petruska-Rhoades, Eshleman, Weaver and Hill provide the first wave of defense for Elco's 4-4 alignment, while Kline and Joe Rittle will handle the cornerback duties and Dane Miller, also the kicker, will hold down the safety spot.

Exactly where that group will land in what figures to be a highly competitive Section Three title race is difficult to say. The return of Lancaster Catholic to the fold via realignment bolsters an already deep section, led by two-time defending champ Northern Lebanon, and tough customers Donegal, Annville-Cleona and Elco itself.

"You go through the section, there's not an easy game," Miller said.

That's where the presence of Horst, more so as a leader than the focal point of the offense, will make a difference.

"One of the things he's brought along with that is some renewed interest from younger guys, like 'Holy cow, I need to get on the ball.'" Miller said. "He's brought leadership with him, not just power running.

"He's quicker as a linebacker, too. That's one of the biggest changes. I don't like being the scout team quarterback as much anymore."