From the archives: High school swimmers rallied behind GameTimePA reporter Steve Navaroli during his battle with cancer.

It’s simple, really. Emily Schmittle wanted to return kindness to a man who had shown her kindness.

She is, after all, a swimmer. One of those pool rats who have always been in or around York Suburban’s pool. She started swimming lessons at age 3 and was on her first swim team at age 5.

“I can honestly not even remember a time when I couldn’t swim,” Schmittle said.

She laughs at this, because she knows it’s not the story of every child. But she came from a
swimming family. Older sisters Katelyn and Lauren swam, so, of course, the family came to watch. And little Emily tagged along. The pool became her playground.

During her time at the pool she learned about this “old” guy. Steve Navaroli has covered swimming for the York Daily Record/Sunday News since 1991, first as a free-lance correspondent and later as a staff member.

Navaroli has covered two generations of swimmers. Everybody on the pool deck seems to know him. It’s swimming, after all, and people at the pool are there because they care about the sport.

“He was kind of the mythical guy at the swim meets,” York Suburban High School junior Will Massey said. “You would kind of hear about ‘The Reporter’ from the older swimmers. ... It was just a cool thing to be interviewed by Steve Navaroli.”

“He was the first person that ever interviewed me,” Schmittle said. “I was really nervous, and he made me not so nervous.”

So when Schmittle learned Navaroli had been diagnosed with throat cancer, she wanted to do something.

She settled on an idea that she had seen before. She would sell T-shirts and donate all of the profits to the Navaroli family to help pay for his medical expenses.
Massey, meanwhile, came up with the slogan “Navaroli Nation.” 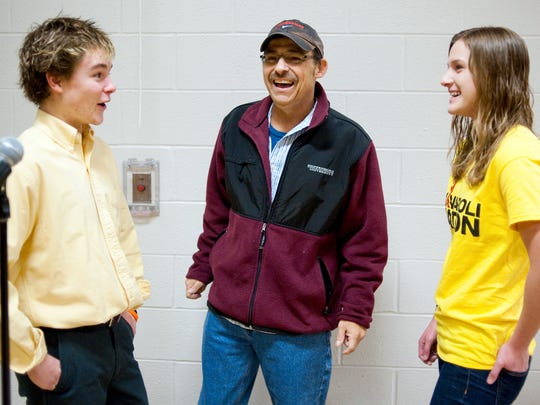 York Suburban swimmers Will Massey, left, and Emily Schmittle, joke around with York Daily Record sports reporter Steve Navaroli before presenting him with a $1,000 check on Monday from money raised via the Navaroli Nation campaign that Massey and Schmittle started to support Navaroli in his battle with throat cancer in 2012. (Photo: File, GameTimePA.com)

And another classmate’s father, Marty Krebs, designed the lettering for the bright yellow shirts; a bright red ribbon twists to create the first ‘A’ in Navaroli.

“I have to tell you, from the very early stages from them presenting the idea to me, I’ve been extremely impressed and extremely proud of the way they’ve handled this situation,” York Suburban athletic director Chris Adams said. “This is truly a student initiative and they’ve done an outstanding job.”

The students set up a table to sell shirts for $10 (for sizes small through large) and $11 (for extra large) at York Suburban sporting events. They started a Navaroli Nation Facebook page to take orders.

They will even mail shirts (add $2.50 postage) outside the area.

They found someone to front the cost for the first batch of 72 shirts, which are now sold out. And they plan to keep selling shirts.

“It’s very humbling,” Navaroli said earlier this week, his voice low and gravelly from five weeks of radiation and chemotherapy. “I think back to myself in high school. I never had the gumption to do something like they’re doing for me. And to think, they’re doing all this for me? It floors me.”

And it’s not just York Suburban students. Others around York County are also raising funds and awareness.

West York swimming plans to raise funds through its annual alumni meet. Schmittle and Massey have been invited to sell “Navaroli Nation” shirts at the West York alumni meet.

“If we have the time, we plan on going anywhere where we are invited,” Schmittle said.

Meanwhile, Rutgers University freshman and Red Lion graduate Morgan Pfaff started an “I Swim For Steve” Facebook page. Spring Grove varsity football coach Russ Stoner said his team will raise funds for the Navaroli family. And the York Ice Hockey Club, for which Navaroli has served as a volunteer assistant for his son’s York Devils team, has an event planned for Navaroli and his family on Nov. 30 at the York City Ice Arena.

“I don’t know if I really deserve this,” Navaroli said. “I’m thinking, am I this special? No way.”

All of the initial work by Schmittle came about because of what she has already experienced. She knows about cancer. She has seen how it hurts. One of her swim coaches at the West Shore YMCA, Kim Jones, was diagnosed with breast cancer about two years ago. Students wore “Swim for Kim” shirts.

Jones died about a year ago, but not before she witnessed what type of impact she made on her community.

“I was really close to her,” Schmittle said. “She was almost like a second mom to me. I saw how much of an effect (the shirts) had on her and how her mood lifted just from seeing that support.”

Schmittle wants to sell more shirts, but she also envisions a special day. She wants to see swimmers and fans at the YAIAA swimming championships standing together, wearing yellow “Navaroli Nation” shirts.

“He will see how much support he has,” Schmittle said.

Navaroli, who is preparing to enter his final week of radiation and chemotherapy this week, admits that part of Schmittle’s goal has already been realized.

“It’s so much more than just putting a name on a shirt,” Navaroli said. “You can’t imagine the strength I get from them.”