Members of the New Oxford cheerleading team conduct a standing pyramid formation earlier this month. The team won its first national championship this winter. Coach Chris Topper said two keys to breaking through on the national stage were building up youth programs to get athletes an early start, and getting male cheerleaders to buy in to the program.(Photo: Shane Dunlap - GameTimePA.com)Buy Photo

This story was originally published in June 2015.

A box of old video cassettes sits in Chris Topper's garage, each full of hours of footage that inspired the New Oxford competitive cheerleading team's rise from a brand new program to a national champion.

There's footage of high school and college teams competing in events televised on ESPN and other networks, footage that Topper and his fellow Colonials coaches watched meticulously as they studied the sport in the mid-2000s.

The journey to those titles starts with those tapes and the time spent watching them after deciding to transform New Oxford's sideline cheerleading program into a competitive one. It ends with a strong foundation that will feed the program for years to come, harmonizing with a winning culture that's welcoming to boys as well as girls.

"It was kind of a mess (at first)," Chris Topper said. "When we started off competing, it wasn't always good because we didn't know how everything worked and were brand new at it. My mom (Diane Topper) was a sideline cheerleader, my sister (Sarah Loy) was a sideline cheerleader. I never cheered in my life, so it was pretty much all watching video, studying tapes and getting the knowledge of cheerleading itself.

"As we grew and got information about how to do everything, it got easier as coaches to know what we needed out of the kids."

The coaches relayed what they learned from watching videos to their athletes, and the team quickly began to find success locally. But success on a bigger scale eluded the Colonials, and the coaches realized why: Four years of high school simply wasn't enough time for cheerleaders to master the sport. 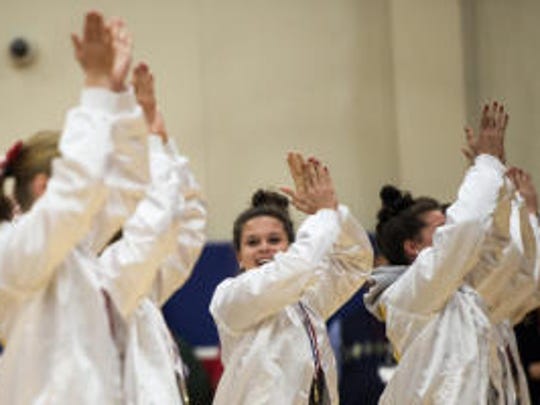 "It definitely helped me," Sammi Loy said. "If I had just started at the high school level, I would've been behind my fellow classmates."

By the time she and some of the earliest youth cheerleaders progressed to the high school, another crucial puzzle piece had fallen into place.

A co-ed competitive cheerleading team requires several boys to compete on the team, even though cheerleading is typically categorized as a female sport.

"It's hard. It's not easy to get guys out," Chris Topper said. "At the beginning it was really tough because it's thought of as such a girly sport. We still face that, but fortunately we have plenty of open gyms throughout the year to invite guys in to see what it's all about. We get them involved, get them active learning the skills they need to learn and once they start it, they start to enjoy. It's a little mixture of a lot of sports."

New Oxford first got boys to join the team when Topper's brother Matt joined with four friends from the Colonials wrestling team. By the time they graduated, the school community stopped seeing it as a strange thing for boys to compete on the cheerleading team.

"It's unique to our school, but it shouldn't be," said Dallas Keeney, a 2014 New Oxford graduate who dropped swimming and lacrosse to participate in cheerleading. He is now a cheerleader at the University of Central Florida.

And so the perfect storm of experienced female cheerleaders competing alongside committed male cheerleaders has led to national success. The Colonials have qualified for the national championships eight years in a row. They placed fifth in 2013 and second in 2014 before winning the title last winter.

"As the years went on, the mentality completely changed from a sense of entitlement (from simply making it to nationals) to a sense of work ethic," Keeney said. "Everyone started grinding and getting into the gym every day, holding everyone accountable and working really hard."

The 2015 national championship doesn't change that. If anything, it provides the cheerleaders with even more motivation. 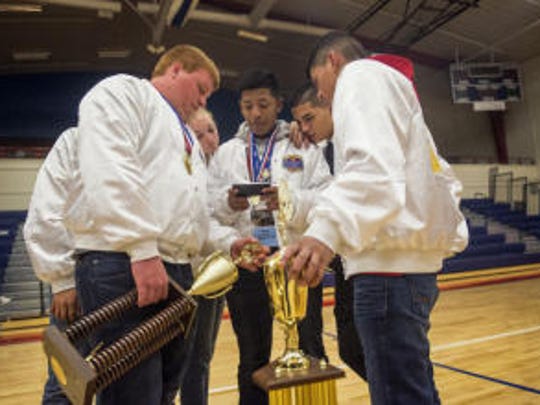 New Oxford's Javier Lua, center, holds his phone in February as he and his teammates watch video from their cheerleading team's national championship. (Photo: File, GameTimePA.com)

"We want to be national champions again, it makes us want to work harder," Sammi Loy said. "There's a lot of pressure to win again."

The members of the national championship team will be gone in a few years, but there's no reason to believe the New Oxford cheerleading team will fade from the national stage anytime soon. The more success the Colonials have, the more interest in the program continues to grow. Just this month, the coaches opened a new cheerleading facility for the program in the Hanover area.

"We have a lot of kids from outside the school district wanting to be a part of the cheerleading program at New Oxford, and that's the reason we opened up the gym for kids to come be a part of a successful program," Topper said. "We try to build the program so that every year we don't have to rebuild, we just reload. If we continue to get our guys out year after year, we should definitely be a strong program here at New Oxford for a while."