High school wrestling uniforms could look a lot different next season, and many in District 3 think the change is long overdue.

Kathy Plocus and her daughter have been designing singlets for the Pa. cadets wrestling team for the past 20 years. 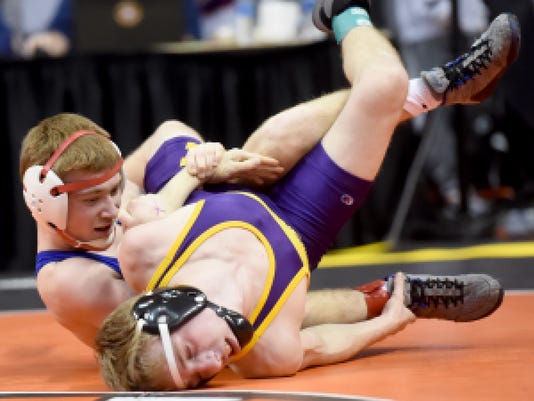 High school wrestling uniforms could look a lot different next season, and many in District 3 think the change is long overdue.

A new rule approved by the National Federation of State High School Associations will allow wrestlers to choose between wearing a traditional one-piece singlet or a two-piece uniform for the 2017-18 season and beyond. The new uniform has to be school-issued and will consist of a form-fitted shirt and compression shorts that will be more in the style of traditional mixed martial arts attire.

The intention of the new rule is to increase wrestling participation by appealing to students who want to try the sport but are turned off by the look of a tight and revealing singlet. For many coaches across the region, it's a plan that could work.

"I know a lot of older people that have been around the sport like the singlet, but the truth is some kids shy away from it because of it," Hanover wrestling coach and athletic director Kurt Brenner said. "I've heard more times than I'd like from kids I'd see in the hallway that they'd give it a try if not for the singlet. I'm perfectly fine with (the new rule)."

While it's impossible to know how many students don't try out for wrestling specifically for uniform reasons, the sport has seen a decrease in participation at the national and local level in recent years. According to participation data kept by the NFSHSA, the number of high school wrestlers in the United States dropped from 281,083 in 2010-11 to 264,149 in 2015-16, a decrease of six percent. The drop-off hasn't been as steep in Pennsylvania, where over the same time period the number of wrestlers went from 9,900 to 9,780, a decrease of 1.2 percent.

Pennsylvania's participation numbers in 2015-16 were surpassed by just five other states, which isn't surprising considering Pennsylvania has long been a hotbed for wrestling. But plenty of programs are still struggling to get wrestlers. Just this past season in the York-Adams league, numerous schools including Hanover, Littlestown, Fairfield and even Red Lion weren't able to put out full lineups for dual matches.

There are a number of reasons for this. Many athletes now specialize in one sport, and it's difficult for smaller schools to fill rosters in plenty of sports. But coaches and wrestlers believe that the singlet is one of the factors.

"Put it this way, am I considering new uniforms with the compression shirt and shorts? Yes I am," Chambersburg head coach Matt Mentzer said. "I think that will allow us to recruit some of these kids if that's their issue with wrestling. It will help. For communities that aren't deep in wrestling support and culture and history, it will be a good thing."

Added Spring Grove junior 113-pounder Dalton Rohrbaugh: "Absolutely it could (increase participation). There are a lot of heavyweights who are self-conscious about the way they look in it. It’s going to be positive if more kids are going to come out." 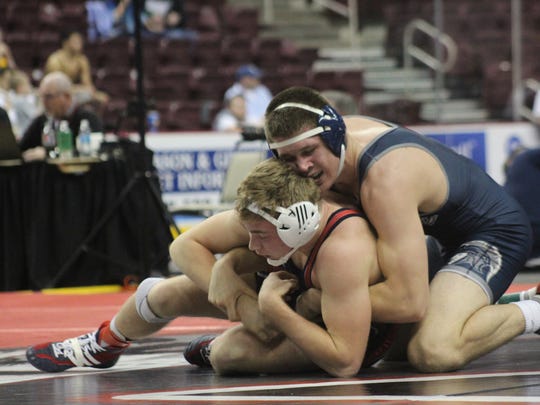 Chambersburg's Drew Peck rides Connor Brinton of Conestoga Valley at 182 pounds during the first round of the District 3 Class 3A wrestling championships on Feb 24 at the Giant Center. (Photo: File, GameTimePA.com)

Rohrbaugh said he'd be open to trying the new uniform, but that as a dedicated wrestler the rule doesn't matter much to him. He added that he's heard from former high school wrestlers who are against it because it breaks tradition.

Veteran Bermudian Springs head coach Dave McCollum has no problem with the two-piece uniform, but said he has his doubts about whether it will lead to a significant increase in participation. He added that Bermudian wrestlers used to wear two-piece uniforms during club matches a decade ago, but stopped because they made the wrestlers feel overheated.

"The two-piece is cool-looking, but it's going to be the same material and if some people are worried about the way they look in a singlet it won't change much," McCollum said. "I'm not really thinking it's going to make a big difference but it could be good for some individuals."

While most coaches agree that serious high school wrestlers will participate no matter the uniform, the new rule could influence middle school wrestlers to try the sport at a younger age. The two-piece uniforms could also cut back on the spread of infections that have become common in wrestling, since a larger percentage of a wrestler's body will be covered.

There has also been talk about whether the new rule could influence more females to try wrestling. But since wrestlers are currently allowed to wear shirts under their singlets, some doubt whether there will be any change in that area. According to the 2015-16 data, five percent of wrestlers across the country are female.

"I think it could lead to more females coming out, but (the new rule) doesn't really matter to me. I'll stick with the one-piece," West York freshman 106-pounder Carly Gross said.

Added Chambersburg's Mentzer: "We had a young lady on the team the past two seasons, everything went fine with what we had."

Even though the rule has been approved, don't expect to see every team in District 3 or Pennsylvania wearing two-piece uniforms next season. Depending on a school's budget situation, team's may have to wait a few years to get them or look for other ways to raise the money. Brenner said he expects Hanover will have to wait a few years before they're able to get them, while other schools such as Northern Lebanon will consider using its booster club to make the purchase.

However long it takes for two-piece uniforms to become consistently worn throughout District 3, many in the wrestling community believe only positive things will come from the rule change.

"The singlet is just an excuse (not to wrestle), but this takes the biggest excuse off the table and anything that gets you a few more numbers is positive," Northern Lebanon coach Rusty Wallace said. "I think we're going to see a big impact at the middle school level."

The NFSHSA has approved a number of other new rules, the most notable of which is that wrestlers can now earn near-falls and pins even if their opponents' shoulders are out-of-bounds. The intention of this change is to make the sport more offense-oriented by preventing wrestlers from diving out-of-bounds to avoid being pinned. This change has been enthusiastically received by many in the wrestling community.

"Anything that expands the mat space is only going to benefit the sport," Mentzer said.