HERSHEY – In the final wrestling match of his career, Austin Clabaugh finished on top.

With the PIAA wrestling championships wrapping up, competitors will finally be able to eat the foods they avoid during the season. A handful of York-Adams wrestlers say which treats they're looking forward to the most.

HERSHEY – In the final wrestling match of his career, Austin Clabaugh finished on top.

Not on the scoreboard, but on the mat in control of his opponent, the place where he’s been most comfortable in his four-year career.

A late takedown of Jefferson Morgan’s Gavin Teasdale put the Bermudian Springs senior in his preferred position, but it wasn’t enough to earn gold.

Teasdale, the No. 2-ranked 126-pounder in country, got everything he could handle from Clabaugh but still claimed his third PIAA Class 2A championship, this one at 126 pounds, with a 13-5 major decision

“I think I wrestled my best so I have to be happy with that,” Clabaugh said. 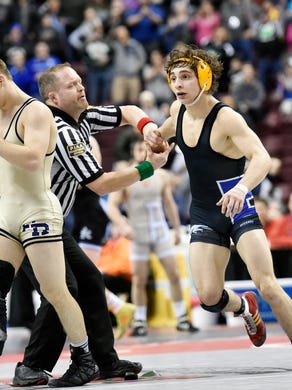 Exeter Township's Austin Desanto, right, starts to run off the mat before having his hand raised by the referee after defeating Franklin Regional's Spencer Lee, left, in the championship 126-pound bout in the PIAA Class 3A wrestling championships Saturday, March 11, 2017, at the Giant Center. The bout was Lee's first defeat in his high school career, during which he'd won three state titles. Chris Dunn, York Daily Record
Fullscreen 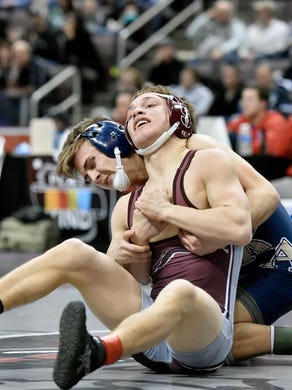 Austin Clabaugh, Bermudian Springs, waits to be introduced during the parade of champions in the PIAA 2A wrestling championships on Friday, March 11, 2017. Jeremy Long, GameTimePA.com
Fullscreen

Austin Clabaugh, Bermudian Springs, is introduced during the parade of champions before he wrestles Gavin Teasdale, Jefferson-Morgan, in the 126 pound PIAA Class 2A State Championship bout. Jeremy Long, GameTimePA.com
Fullscreen 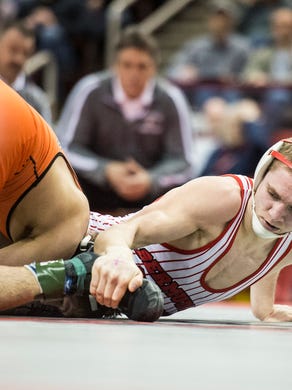 Austin Clabaugh, Bermudian Springs, poses for a picture on the awards stand with his silver medal in the 126 pound PIAA Class 2A State Championship bout. Jeremy Long, GameTimePA.com
Fullscreen

Delone Catholic's Brian Shermeyer is consoled by his coaches after he fell 6-2 in the 160 pound seventh place bout in the PIAA 2A wrestling championships on Friday, March 11, 2017. Jeremy Long, GameTimePA.com
Fullscreen

Littlestown's Carl Harris is consoled by his coach after he lost 8-2 to Sharon's Nick McClimans in the 170 pound seventh place bout in the PIAA 2A wrestling championships on Friday, March 11, 2017. Jeremy Long, GameTimePA.com
Fullscreen 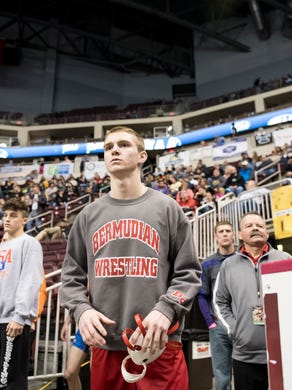 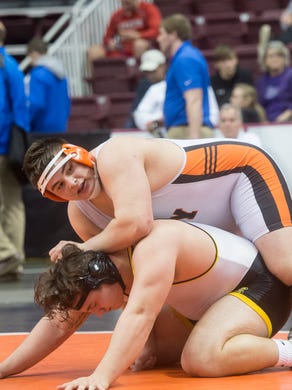 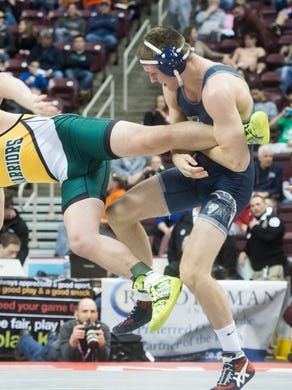 Chambersburg's Drew Peck receives medical attention for a cut on his head during a 182-pound quarterfinal bout during the PIAA wrestling championship at the Giant Center in Hershey, Pa., on Friday, March 10, 2017. Peck won by decision 8-5. Dan Rainville, GameTimePA.com
Fullscreen 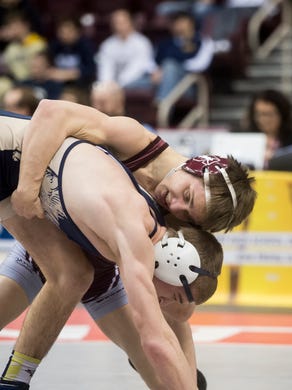 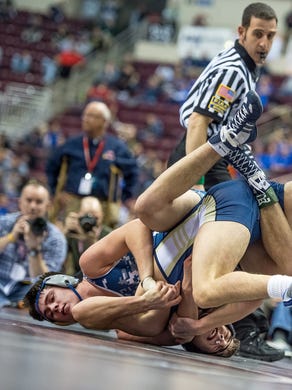 Fox Chapel's Mike Mahon, bottom, suffers a blood injury while taking on Palmyra's Leo Higgins in a 182-pound bout during preliminaries of the PIAA wrestling championship. Wrestlers are given an allotted 5 minutes during a match to help curtail a blood injury. Noelle Haro-Gomez/GameTimePa.com
Fullscreen

Palmyra's Leo Higgins has to stop after blood from his opponent is on his hand during PIAA wrestling championship on Thursday, March 9, 2017 at Giant Center in Hershey, Pa. Noelle Haro-Gomez, GameTimePa.com
Fullscreen

An injury timeout is taken for Red Lion's Dylan Gurreri during the PIAA wrestling championship on March 9 at Giant Center in Hershey, Pa. Wrestlers get 1 minute, 30 seconds to be evaluated for injury during a match. They can either continue wrestling or be disqualified. Noelle Haro-Gomez/GameTimePa.com
Fullscreen

Chambersburg's Drake Brenize, right, brings Easton's Hayden Keleher to the mat for a takedown in the preliminary round at 152 during the PIAA Wrestling Championships on Thursday, March 9, 2017 at Giant Center in Hershey, Pa. Keleher won by decision, 5-4. Noelle Haro-Gomez, GameTimePa.com
Fullscreen

It was a rough weekend in the Hershey for YAAIA competitors: Only five league wrestlers earned medals in the tough three-day event recognized as one of the toughest state high school tournaments in the country.

Teasdale is one of the most accomplished wrestlers in either classification.

The University of Iowa commit entered with a perfect 121-0 record and was averaging more than 23 points per state tournament match in the last two years.

A terror from the neutral position, the District 7 wrestler took just a 4-1 lead after the first period on the strength of two takedowns.

“I was able definitely to slow him down," Clabaugh said. "He came out full force, really really quick. I was able to compete with that pretty well for the first period.”

With choice in second period, Clabaugh chose top, where he excelled throughout his 149-win career. Clabaugh controlled Teasdale for 1:47 of the second period.

“I took top, had to give myself a chance because he wasn’t going to take down,” said the three-time PIAA qualifier. “I was able to ride him hard. … I dominated him pretty well through that second period.

“I was at least able to work my stuff.”

“He’s had to deal with things a lot of kids never have to deal with,” McCollum said. “He’s grown up in the last two years. He became a leader. He was like a third coach on the team, motivating the coaches and kids, always being positive.

“He has represented Bermudian with class and great sportsmanship.”

In other action, Shermeyer fought though several injuries during the postseason, the worst a hamstring pull. But there was no thought of taking a medical forfeit.

Harris, only a sophomore, came away from the tournament knowing what he needs to work on.

“This (tournament) is the hardest thing I’ve ever done in high school. … On the mat (skills). I couldn’t get out to save my life,” said the 36-7 Bolt grappler. 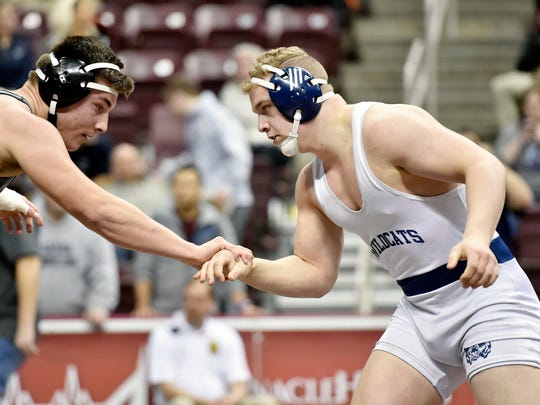 Class 3A: Zurich Storm of New Oxford came away with the highest medal in the big school division for the YAIAA, claiming sixth place at 120 pounds.

After starting his four trip to the state tournament with a pair of wins, the Colonial lightweight ran into a buzzsaw in Northampton’s Julian Chlebove. The defending state champion racked up 12 back points on his way to a 4:46 technical fall.

However, another tough loss waited him in the consolation semifinals where, holding a 4-0 on Central Dauphin’s Chris Wright, Storm got caught in a spadle and pinned at 3:31. Two weeks ago, Storm had easily defeated the Ram junior to win his first District 3 title.

A 6-4 loss in the seventh-place match to Logaan Macri of Canon McMillan left him in sixth place but hoping future Colonial wrestlers will learn an important lesson from his stellar career.

“Not to quit. Always find something to work on to get better,” said the 35-4 senior. “To be a four-time qualifier and finally get a medal last time was (great). It’s not the one I wanted but I got it.”