There was a moment this winter when Seth Leonard thought his track and field season might be over before it started.

Delone Catholic junior Seth Leonard discusses his development as an athlete, and breaking the school's javelin record this season.

There was a moment this winter when Seth Leonard thought his track and field season might be over before it started.

The Delone Catholic junior had sustained nerve damage in his right shoulder during football season, and was having trouble just moving it. As a right-handed javelin thrower with big goals after finishing third at the league meet last season, Leonard was crushed.

"I was really worried about it," Leonard said. "I just thought my season was over. I didn't think I was going to be able to push toward the school record. I thought I was going to have to wait another year."

Thankfully for Leonard, he recovered and was able to start practicing about a month before the season started. Things have been going for him smoothly since.

In the Squires first meet of the season against Hanover on March 24, Leonard broke the school's javelin record of 168 feet by throwing 174 feet, 4 inches. He's consistently reached around 160 feet or more since then, establishing himself as the top javelin thrower in the YAIAA and potential contender in District 3 Class 2A.

Watch:Leonard establishing himself as top thrower

More track and field:Shaw, Hartlaub in friendly rivalry to be the fastest for South Western

Having set a personal record of 151 feet as a sophomore, Leonard thought breaking the school record this season was realistic. Still, he didn't expect to get there as quickly as he did.

"At the start of the season I didn't think I would (have this success) because of the injury, but I knew what my goal was and had to hit my goal," Leonard said. "I'm loving it, I'm going to have fun with it and I'm going to keep pushing my goal further and further."

While Leonard would love to win league and district titles this season, he's more focused on hitting specific numbers. For javelin, the mark he's determined to reach by the end of the spring is 195 feet. For comparison, last season's Class 2A javelin champion, Biglerville's Ben Hurda, had a top throw of 186 feet.

Deluge's Seth Leonard gets ready for his second attempt in the javelin, Wednesday, April 19, 2017. Leonard won the even, with a throw of 169 feet, two inches.  (Photo: Ty Lohr, GameTimePA)

One reason Leonard sets the bar so high for himself is because of his coach, Brian Monahan. A 2011 Delone grad and former Bucknell field athlete, Monahan holds the Squires records in the discuss and shot put. Because of his own success, Monahan isn't easily impressed and makes sure Leonard keeps from getting ahead of himself.

"It's tough because right now Seth is the best in the area, and he doesn't have that figure (to motive him)," Monahan said. "So I have to keep telling him, 'Listen, there are lots of kids in the state who are hungry too, who are just as talented as you or working just as hard as you. You have to keep that in the back of your mind.'"

Leonard also throws the discus, and has improved his personal record from 74 feet to 127 feet this season. While he jokes with Monahan about breaking the coach's school record of 158 feet, both of them know there are more important things than that.

The last thing Monahan wants is for Leonard to overexert himself and sustain an injury that would prevent him from going to the state championships. Because of that, the second-year coach has the junior focusing on technique and form.

"It's important in an event like this where athletes are injury-prone — especially when you throw farther distances because it's very stressful to the elbow — to take small, calculated steps forward," Monahan said. "The main purpose we have right now is to remain healthy and consistent and then peak at the right time."

With his entire senior season still ahead of him, Leonard has no problem progressing slowly. Still, he's determined to compete at states this season, and hopes to eventually throw in college.

"I'm an athlete that pushes myself until I can't push myself anymore," Leonard said. "It's takes lots of practice, lots of form, and lots of time."

Deluge's Seth Leonard gets ready for his second attempt in the javelin, Wednesday, April 19, 2017. Leonard won the even, with a throw of 169 feet, two inches. Ty Lohr, The Evening Sun
Fullscreen 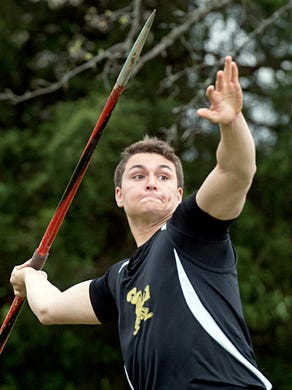