The top YAIAA athletes from the 2015 season, as selected by the GameTimePA.com staff

Introducing the YAIAA girls basketball all-stars, as selected by the GameTimePa.com staff

The sophomore was expected to take a step forward, but she might have even exceeded those expectations. Bauhof led the league in scoring average with 21.7 points and surpassed the 40-point mark in multiple games. She also finished second in the league with 59 3-pointers.

The highlight of Dimoff's season might have been scoring the game-winner against Central in the YAIAA title game, but there were plenty of other accolades as well. The Millersville commit ranked fifth in scoring (14.7), first in free-throw percentage (87) and first in 3-pointers made (78).

At times, it seemed Kloster was the only Bobcat who could score, but the Millersville commit certainly scored in bunches. Kloster was typically the best player on the floor, evidenced by her average of 17.3 points per game.

Behind Long's 15.5 points, the Colonials returned to the district playoffs and won a preliminary round game for the second straight season. Along with Bauhof and Saxton, Long will return as one of the league's premier players in 2016-17.

Saxton was one of the best two-way players in the league this season. She guarded the opponent's best player every night and still averaged 13.4 points on the offensive end while leading Central to a 23-6 record.

In her final season at William Penn, Steele made sure her name would be on the all-time scoring banners hanging in William Penn's gym. She also helped lift the Bearcats to a surprising 15 wins and a district playoff berth. Steele also averaged more than 18 points.

The Warriors were one of the biggest surprises this season, going 21-4 and winning a division title. Stone was at the forefront of that effort, averaging 12.5 points. Stone's head coach praised her throughout the season for lifting the Warriors when they needed it most.

Video Q&As and more photos of the all-stars

Seven all stars answer a series of rapid-fire questions. 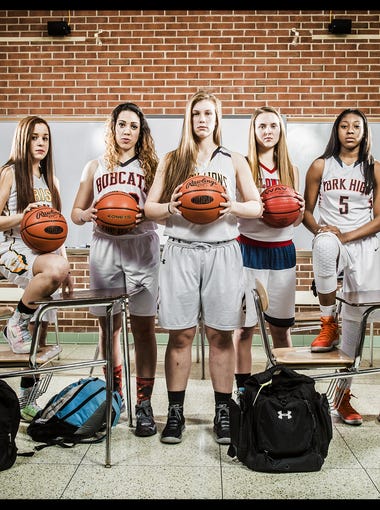 York Suburban's Parker Faircloth-Henise, left, and Olivia Gettle, converge on William Penn's Chyna Steele as she goes up for a shot during the Trojan's 50-38 victory on Monday, Jan. 11, 2016(Photo: Jason Plotkin, GameTimePA)
Fullscreen

See the rest of the fall all-stars and find out when to look for them in print.

GameTimePA.com is planning an end-of-the-year event to honor all of our first-team all-star selections and name our players of the year for the fall, winter and spring seasons.

Chapters
GameTimePA.com girls' basketball all-stars
The top YAIAA athletes from the 2015 season, as selected by the GameTimePA.com staff
Meet the all-stars
First-team all-star capsules, Coach of the Year, second team and honorable mention lists
Multimedia
Video Q&As and more photos of the all-stars
Explore the series
See the rest of the fall all-stars and find out when to look for them in print.
Share
Enjoy a limted number of articles over the next 30 days
Subscribe Today
Log In
Subscribed, but don't have a login?
Activate your digital access.
Join the Conversation
To find out more about Facebook commenting please read the
Conversation Guidelines and FAQs