He ran the Lions offense with impressive efficiency, throwing for more than 900 yards and rushing for more than 900 yards. Emig was a key player in helping the Lions tie the franchise record for wins (10) in an undefeated regular season. He threw just one interception in the regular season, completing 78 percent (97-of-125) of his passes. Emig also rushed for 18 scores.

In a rebuilding season for the Canners after winning their division in 2015, Adams made his presence known by rushing for more than 300 yards and scoring four touchdowns in Week 1. Adams challenged for the league lead in rushing yards, even during a winless season for the Canners. He needed just six games to crack the 1,000-yard plateau, and he scored more than a dozen touchdowns.

The feature back managed to help push the Irish over the top this season. York Catholic beat division foe Bermudian Springs for the first time since 2010, won its first division title since 1992 and won its first district championship since 1982. Kinard rushed for 2,063 yards, picking up 7.3 yards per carry. He scored 23 touchdowns and was held under 90 yards rushing only once all season — when he was pulled from a game for precautionary reasons.

He compiled 1,298 yards rushing on 183 carries, picking up 7.1 yards per carry. A big offensive weapon in Red Lion's undefeated regular season, he cracked the 100-yard rushing plateau in eight of the first 10 games of the season. He scored nine touchdowns on the season, including seven rushing scores.

Barton recorded at least one catch in every regular-season game this season, pulling in 38 receptions for 684 yards. A big-play threat, he averaged 18 yards per catch, scored seven touchdowns and ranked among the league leaders in receiving yards.

The 6-foot-4, deep-ball threat ranked among the league's best in receiving yards and yards per catch all season, finishing with 27 catches for 760 yards and nine touchdowns. He racked up 1,043 all-purpose yards. Ray helped the Spartans secure four wins, the most by the program since a six-win season in 2009.

Barclay was a leader on the Trojans' playoff squad that used a near-balanced attack to close the regular season with eight straight victories. Barclay helped the Trojans rush for 2,017 yards, and provided the protection needed for the Trojans to pass for 1,644 yards.

The only player to earn honors on GameTimePA's first-team offense and first-team defense. The best lineman in the league, he was the star on a unit that allowed Red Lion to become one of only two teams in District 3 to finish the 2016 regular season undefeated. Of the Lions' 38 rushing scores, it wasn't uncommon to see Argento down field knocking over defenders as a Red Lion ball carrier ran in his wake.

He was a leader on an offensive unit that powered through defenders by scoring a combined 32 rushing touchdowns. Dallastown was held to fewer than 20 points in just three games on the season, compiling 2,578 total yards.

A two-year starter, Lucas was one of the Lions' big blockers up front that allowed the team to gain more than 3,000 yards on the ground and record 38 rushing touchdowns. Behind his play up front, Red Lion managed to score 27 or more points in each of the 10 regular-season games.

Big even by linemen standards, the 6-foot-4, 275-pound junior played both ways for the District 3 champion Irish. He opened holes for the 10-win Irish, with York Catholic recording 3,294 rushing yards in 12 games for an average of 274.5 yards rushing per game.

He opened the Warriors' Week 5 game against Susquehannock with a 95-yard kickoff return for a touchdown. His game-opening spark came a week after he returned the opening kickoff 78 yards for a score in a 21-19 win against Dover in Week 4.

He scored 60 points by converting 36-of-37 PATs and eight field goals. Pew booted a season-long 47-yard field goal, and he drilled 16 kickoffs for touchbacks. The senior also earned GameTimePA first-team honors in soccer.

The explosive Young was once again one of the most dynamic defensive linemen in Division I. The senior racked up 73 tackles and 3.5 sacks, despite consistently being the focus of opposing offenses.

Another end who excelled against the run and the pass, Marshall was one of the Mustangs' brightest spots in 2016. He finished the season with 79 total tackles, including a whopping 16 for a loss, and three sacks.

The 6-foot-3, 305-pound Argento was just as dominant on defense as he was offense. The senior finished with 85 tackles and three sacks as Red Lion never allowed more than 18 points all season.

Opposing coaches tried all season to run the ball away from the 6-foot-4, 260-pound Jacobs. It never worked, as the Rockets senior finished with 65 total tackles, with 14 for a loss. He was named Division I Co-Defensive Player of the Year by the coaches.

Hamilton was one of the strongest defensive players in Division III and a constant playmaker for the Class 2A champion Irish. He finished the season with 85 tackles, seven sacks and three fumble recoveries.

The leader of arguably the top defense in the league, Kling registered 83 tackles, two sacks and one fumble recovery. He helped the Bobcats post three shutouts and lead the league in yards allowed.

Voted the top defensive player in Division II by the coaches, Hoffman finished with a whopping 107 tackles to go with four fumble recoveries, two interceptions and a sack. He helped the Trojans overcome an 0-2 start to make the district playoffs.

The versatile Jones was an effective receiver but an even better cornerback. He picked off four passes and registered 30 tackles for the undefeated Lions.

Granted a fifth year of athletic eligibility by the PIAA after having to redo his freshman year, Bowie made the opportunity count. Nicknamed "Bowie Island," the senior routinely played man-to-man coverage and finished with three interceptions, 14 passes defended and two fumble recoveries.

While fans are more likely to remember his long touchdown passes and runs, Yokemick might have been just as good at safety as he was at quarterback. He finished with 94 tackles, four interceptions and one fumble recovery.

Strong against the run and the pass, VanCampen finished off a stellar career with 45 tackles, four passes defended and one interception. He was named one of the top two safeties in Division I by the coaches.

He averaged 39.1 yards per punt this season, pinning opponents inside the 20-yard line on 12 occasions. He hit a season-best 59-yard punt. He handled all the kicking duties for the Panthers' District 3 playoff team, converting 36-of-39 PATs and kicking seven field goals. He also kept return men on their toes, turning in several vicious tackles. Luckenbaugh also earned GameTimePA first-team honors in soccer.

He took over the program just four years ago, inheriting a one-win team. Following steady improvement, the Lions recorded a Division I title, an undefeated 10-0 regular season and an appearance in the District 3 playoffs. The team tied the school record for single-season victories, and it marked the program's first undefeated regular season since 1974.

Offensive Football Player of the Year |Sam Emig, Red Lion, sr.: He ran the Lions offense with impressive efficiency, throwing for more than 900 yards and rushing for more than 900 yards. Emig was a key player in helping the Lions tie the franchise record for wins (10) in an undefeated regular season. He threw just one interception in the regular season, completing 78 percent (97-of-125) of his passes. Emig also rushed for 18 scores. Jeff Lautenberger, GameTimePA.com
Fullscreen

Biglerville's Reggie Adams catches a pass during a preseason workout. The running back was named a first-team GameTimePA all-star. Shane Dunlap, GameTimePA.com
Fullscreen

Gettysburg's Wesley Gayle runs for a touchdown on the opening play of the game on Friday Sept.30, 2016 at Gettysburg High School. The Warriors won 41-3 against Susquehannock. John Irwin, For Game Time PA.com
Fullscreen

Dallastown's Drake Pew kicks the ball for a 47-yard field goal against Central York in the first half of a YAIAA football game Friday, Oct. 28, 2016, at Dallastown. Chris Dunn, York Daily Record
Fullscreen 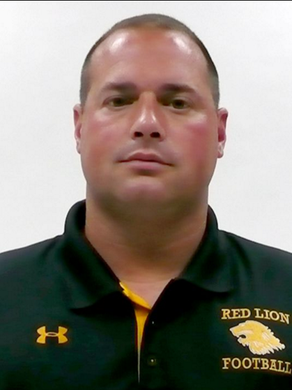 GameTimePA's YAIAA All-Star Week runs Dec. 9-18. Here's the schedule of when you can find your favorite all-stars online and in print.