The top boys' lacrosse players from the 2016 season, as selected by the GameTimePA.com staff

The top YAIAA athletes from the 2016 season, as selected by the GameTimePA.com staff

First-team all-stars capsules, Player and Coach of the Year, and honorable-mention list

Introducing the YAIAA first-team all-stars for the 2016 season.

No one gave opposing coaches as many matchup nightmares as Mailman did this season. Several teams elected to double-team or face guard him, a clear sign of respect from opposing coaches. Mailman still managed to score 60 goals and add 18 assists while leading York Suburban to a third-straight winning season.

A year after posting 61 goals as a sophomore, Bolton scored 63 times as a junior. Bolton scored at least three goals in 14 of the Rockets' 16 games.

In his first year with the Warriors, the Goucher College commit finished the regular season Top 5 in assists (33) and Top 10 in goals (43). DeVincent makes his second-straight appearance on the first team after scoring at least four goals in a game six times.

Emig was the main benefactor from teammate Jac Gemmill's league-best assists total. Emig scored 74 times — 11 more than the league's next-best goal-scorer. It's the second-straight season Emig has surpassed 70 goals and led the YAIAA in scoring.

Faster has been called one of the most skilled players in the league by opposing coaches and players for his shooting and passing abilities. Faster scored 43 goals while helping lead Susquehannock to a 12th straight winning season.

Gemmill led the league in assists all year, totaling 54 in the regular season. In most cases, a player who focuses that much on assists has a lower goal total. Not Gemmill. The senior matched his assists numbers with 54 goals.

While the Lions were more known for their high-powered offense, Keough held down the defensive end. The senior's physicality and strength in the groundball category made him the league's top defender.

The Frostburg State commit led the league in save percentage from the start of the season all the way through the end. He was widely considered by opposing coaches and players to be the toughest goalie in the league.

Before an injury sidelined Norton in the postseason, the senior was York Catholic's top offensive weapon, evidenced by his 48 goals. Norton helped the Irish get into the playoffs, where they won their first YAIAA title and reached the district quarterfinals.

The junior attacker eclipsed the 50-goal mark in the regular season and added 17 assists while helping lead the Panthers to the YAIAA title game and a district playoff appearance.

It was hard to tell if Yanick was a better passer or shooter because he did both so well. The York College commit recorded 30 goals and 31 assists in the regular season. Yanick had three or more assists in four games.

Yantek finished second in the league in assists (40) and added 35 goals in Central's high-scoring offense. Yantek will play at Ursinus College next season.

Harper took a team that was projected to finish in the middle of the pack to its first YAIAA title and a district quarterfinal appearance. The Irish improved by nine wins in 2016 with a 15-4 record and averaged 15 goals per game — second best in the district.

Video Q&As and more photos of the all-stars

Our first-team all stars discuss favorite songs, funniest moments and which superheroes they'd want to be. 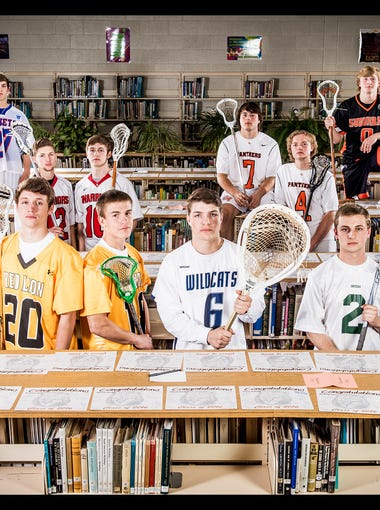 See the rest of the fall all-stars and find out when to look for them in print.

Visit GameTimePA.com to see a slideshow of the first-team all-stars and to watch their All-Star Outtakes Q&A videos from the photo shoots.

Chapters
GameTimePA.com boys' lacrosse all-stars
The top YAIAA athletes from the 2016 season, as selected by the GameTimePA.com staff
Meet the all-stars
First-team all-star capsules, Player and Coach of the Year, second-team and honorable-mention list
Multimedia
Video Q&As and more photos of the all-stars
Explore the series
See the rest of the fall all-stars and find out when to look for them in print.
Share
Enjoy a limted number of articles over the next 30 days
Subscribe Today
Log In
Subscribed, but don't have a login?
Activate your digital access.
Join the Conversation
To find out more about Facebook commenting please read the
Conversation Guidelines and FAQs

The top boys' lacrosse players from the 2016 season, as selected by the GameTimePA.com staff