For a pair of transfer students, Thursday night’s Week One showdown between Manheim Township and Central Dauphin was a showcase of ability.

LANDIS FIELD — For a pair of transfer students, Thursday night’s Week One showdown between Manheim Township and Central Dauphin was a showcase of ability.

But the final score showcased Central Dauphin’s experience and athleticism up front as the host Rams scored three touchdowns in the second quarter, aided by a handful of big plays, to turn away the visiting Blue Streaks 31-9.

“It’s a recurring theme that I could play back five years now, the big play part of it,” said Township head coach Mark Evans, whose teams have come up short versus the Rams in each of the past five seasons. “We’re not creating enough momentum for us and when we have a chance to get off the field we give up a big play.”

While junior transfer Luke Emge (22-34, 257 yards, TD) had success through the air most of the night versus the Rams defense, the Streaks never got the running game going as Central Dauphin’s size up-front, including that of Chase Flythe, Clayton Tinkham, and Micah Parsons, held Township to negative yards on the ground in the first half.

“Our lineman weren’t firing off the ball and moving their feet,” Evans said. “We talked about it at halftime, learning from it. Again, they’re a whole new group. They’re going to be alright, that group is just learning on the job. That’s the only way you’re going to get experience.”

By the half, however, the Streaks were left with a 24-9 deficit, narrowed after Emge led a quick-strike offense in the final 50 seconds before halftime, finding favorite target Kade Kubicki (11 catches, 199 yards) for a 22-yard score with five seconds to spare.

The Rams had gone ahead 10-3 in the second quarter on Parson’s eight-yard run. On the subsequent drive, a high snap on a punt midway through the quarter gave CD a first-and-goal opportunity from the nine. Dylan Weaver, a transfer from Northern Lebanon, broke two tackles on an eight-yard burst for a 17-3 lead.

Weaver then sparked the Rams on the next drive, finding Trey Paul down the sideline on a halfback option pass to set up a nifty third-down touchdown grab by Sylas Pope on a pass from AJ Millar (8-12, 90 yards, TD), putting the Streaks in a 24-3 hole.

“Sometimes you wonder why you’re putting your nose into the fire right off the bat,” Evans said on facing Central Dauphin to open up the season. “But I’m not going to back down from the challenge and I don’t want these guys to. We’re growing and we’re building, and I like this group and they’re going to be fine. They’re going to be fine, they just have to learn from their mistakes and get better.” 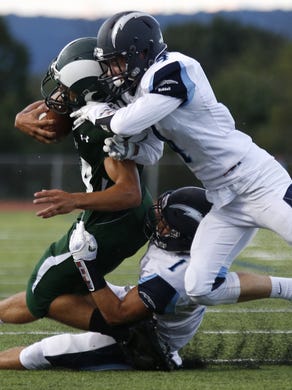 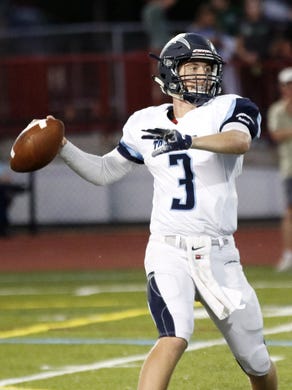 Parsons, a junior Penn State recruit, had numerous tackles for loss in the game while also transitioning to offense for the first time. He finished with 50 yards rushing on four carries and caught one pass for 16 yards, helping set up Millar’s 28-yard scamper in the third quarter to round out the scoring.