Cedar Crest's Luis Minaya, left, and Kobe Bolanos sits on the Falcons bench during a 54-42 loss to Hempfield in the District 3 Class AAAA tournament first round Wednesday. Ashley Walter, For the Lebanon Daily News
Fullscreen

Cedar Crest's Luis Minaya, left, and Kobe Bolanos sits on the Falcons bench during a 54-42 loss to Hempfield in the District 3 Class AAAA tournament first round Wednesday.(Photo: Ashley Walter, For the Lebanon Daily News)Buy Photo

A boa constrictor clothed in red and black slithered inside the Cedar Crest High School gym Wednesday and crushed the Falcons' season.

Maintaining control through a slow, lethal tempo and constant curling around the basket, it sapped clock offensively until eventually squeezing score after score out of the Cedar Crest defense. At the other end of the floor, it stilled the Falcons' motion offense through an unrelenting grasp on their top scorer.

Too often, there was simply no escape for the blue and white. And then, after 32 minutes, only a terminating finish.

No. 9 Hempfield handled eighth-seeded Cedar Crest, 54-42, in a District 3 Class AAAA boys basketball tournament first-round matchup Wednesday, leading for the night's final 29 and a half minutes. Black Knights senior Connor Moffat topped all scorers with 22 points, while the Falcons' Evan Horn was limited to 11, which matched his season low.

Netting only two field goals inside each of the second and third quarters, Cedar Crest (19-7) watched its season and quest for a third straight district final berth come to a close.

“I don’t think that early on, as a group, we played with a lot of confidence," Falcons coach Tom Smith said. "We knew what they were going to do. We practiced it. I just don’t think our kids trusted themselves.

"Taking Evan out of the game takes a huge part of our offense out. And then we got a little crazy at times. So I think that was part of it.”

Ahead by a dozen at halftime, the Black Knights went on to lead by as many as 17 during the second half, which opened with a 100-second Hempfield possession.

With Horn doubled at nearly every touch of the ball at the other end, the Knights' long offensive trips only further drained Cedar Crest's late comeback efforts.The Falcons never cut their deficit to single digits post-intermission.

“We’ve worked on the pace by use of space. I thought we had to get space and that would allow us to get the tempo that we wanted," Hempfield coach Danny Walck said. "I thought as long as we could spread the floor, get proper use of the dribble and the guys who were moving without the ball to set up passing lines, we had an opportunity to create some of that stuff.” 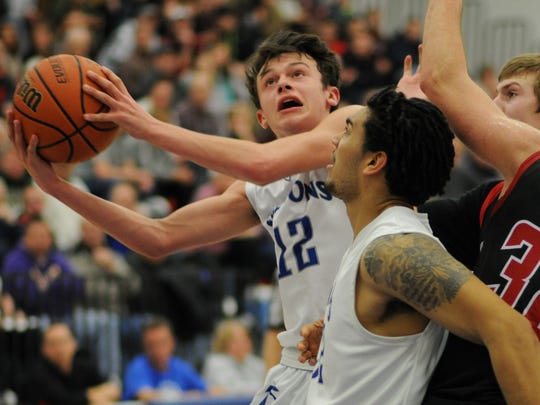 Even when Horn wriggled free for two baskets and an assist in the first quarter, the Knights still dictated play and had their hosts doubled up at 18-9 heading into the second quarter. Hempfield very well could have duplicated that same feat again later had it not been for Dylan Miller (11 points), the only other Falcon to finish in double figures.

With Miller supplying some offensive relief, Horn captained his final fourth-quarter charge inside The Cage, nailing three of four foul shots, swiping a steal and at last exiting with fellow seniors Iziah Trimble and Raymie Ferreira to a standing ovation.

“The biggest thing about the caliber person and player he is, you know he’s going to fight you to the end," Walck said of Horn. "Whether you’re up 20, you’re up 18 or you’re up 12, it never seems like it’s enough.”