Here are 15 Franklin-Fulton athletes who had good performances last week.

TAYLOR COFFMAN, Fannett-Metal girls basketball: Coffman scored 17 points for the Tigers - 13 in the first half - as F-M claimed a 61-54 victory over Northern Bedford for its first win over the SHL/ICC foe since 2008-09.

BROOKE EMGE, Shalom Christian girls basketball: Emge scored 18 points for the Flames in back-to-back games, leading Shalom in a 51-21 win over MDCC foe CV Christian, and in a narrow loss to South Hagerstown. She also scored 20 points against Grace Academy.

JENAY FAULKNER, Greencaslte-Antrim girls basketball: Faulkner had two 21-point performances last week against Shippensburg and Waynesboro. She had a double-double against the Maidens, adding 10 rebounds, and also scored 18 points against Northeastern.

BRIAN GEMBE, Greencastle-Antrim boys basketball: Gembe notched a career-high 25 points against Waynesboro, added another 21 vs. Ship and 10 points against Northeastern. In the first nine games of the season Gembe averaged just 6.4 points per game. 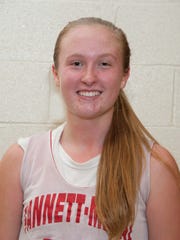 DYLAN GORDON, Southern Fulton boys basketball: Gordon pulled off a double-double in an overtime loss to Everett, scoring 29 points and pulling down 12 rebounds. He also scored 15 points against Forbes Road.

KATIE JOHNS, Fannett-Metal girls basketball: Johns racked up a double-double in an historic win over Northern Bedford, with 10 points and 14 rebounds. She also scored a season-high 14 points against Belleville Mennonite. Through the first seven games of the season Johns averaged just 5.4 points per game.

BRANDEN LYNCH, Southern Fulton boys basketball: After averaging just 5.1 points per game to start the season, Lynch finally broke into double figures twice this week, scoring 15 points against Forbes Road and adding another 10 versus Everett. He also had four blocks against the Cardinals.

LUKE NICHTER, Chambersburg wrestling: Nichter went 4-0 at the Wilson Duals in the 160-pound weight class, including a pin in 12 seconds over his opponent from Spring Grove.

DEREK PINE, James Buchanan wrestling: At the Bloody Run Duals in Everett, Pine went 4-0, including a pin and a major decision.

MADISON SWEITZER, Greencastle-Antrim girls basketball: Sweitzer had one of her best games of the year, pulling down seven rebounds and scoring seven points along the way  in a win over Waynesboro.

ELIJAH ZINN, Shippensburg boys swimming: Zinn won the 50 and 100 freestyle swims against Northern, finishing with District 3 qualifying times in both, and also aided the winning 200 IM and 200 free relay teams to wins in the Mid Penn Colonial meet against the Polar Bears.