What's next for Chambersburg softball?

Eight seniors make up six of Chambersburg's nine starting positions on the diamond. Without that talented group - what is next?

What's next for Chambersburg softball?

The Chambersburg softball team took over the GameTimePA Snapchat and claimed their second straight District 3 title.

The Chambersburg softball team will look a lot different next year without eight talented seniors on the roster.(Photo: Lindsey Smith, GameTimePA.com)Buy Photo

Eight stellar seniors who each had a hand in Chambersburg's back-to-back District 3 championship titles, and an exciting run to the PIAA semifinals two years in a row.

They hit a combined average of .341, had 107 RBIs, and make up six of the nine starting positions on the diamond.

"They bought into the system and that's how we turned this program around," Chambersburg coach Chris Skultety said. "They are a great group of young women that trusted the process, did the right thing and got where they deserved."

But without them, what is on the horizon for the Chambersburg softball team?

Speed: Chambersburg coach Chris Skultety relied on his "little deer" on the base pads for the last two seasons, and cultivated an aggressive base running style that throws the best defenses off balance.

Kirsten Johnson, Laikayn Wagner, Alyssa Wenger, Molly Keefer, Taylor Myers and Kara Neidigh are just a few of the speedy base runners who will take the team under their wings next year.

Quick hands at short stop: Rising junior Alexis Estep took on the role of starting shortstop after transitioning Leah Hunt to third at the beginning of the season, and was a solid infielder throughout the season.

"Estep will be with us for two more years and she's a phenomenal short stop," Skultety said. "She has done everything we've asked and her bat has really come around. She's going to be one of our leaders the next two years, no question."

Estep batted .400 and had 14 RBIs, stole eight bases and had just four errors throughout the season.

Chambersburg's Alexis Estep is one of three returning position players and will likely be step in as one of the team leaders next year. (Photo: Noelle Haro-Gomez, GameTimePa.com)

Winning culture: It took two years, two District 3 championships, and two trips to the PIAA semifinals to establish a winning culture around the Chambersburg softball squad --  and to inspire mass support from the surrounding community.

Chambersburg has not lost a game at home in two years thanks in part to the immense support from the Lady Trojan fan club.

"I think these last two years brought that winning culture back," Skultety said. "There were some down times, but we brought back that team concept and that's the biggest thing to get some wins. The community support has been fantastic. These girls work hard and deserve it." 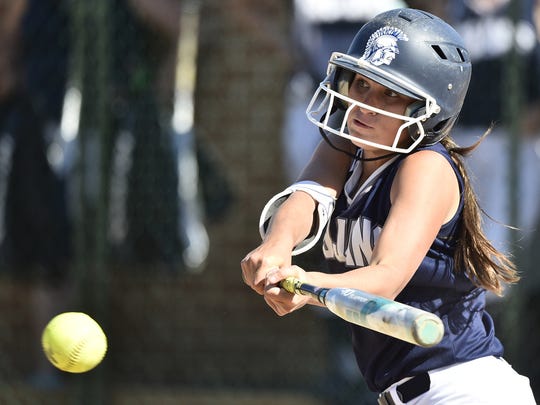 Chambersburg's Taylor Myers is one of the three returning position players and will need to lead the team at the bat and with her speed on the base pads next year. (Photo: Markell DeLoatch, GameTimePA.com)

Batting: In the last two seasons Chambersburg has had a heavy-hitting lineup that has kept even the best pitchers at bay -- but only two batters will return to the order next season. Chambersburg will need to find a way to replace its "murderers row" of sluggers in the middle of its lineup, and duplicate the "scrappy" batting style of its returners Estep and Taylor Myers.

"We're going to have a different kind of lineup next year," Skultety said. "We're not going to be that power-hitting team, but we're going to be fast. We have to get girls on base an manufacturer runs, especially until we get the pitching going."

Skultety said the team has some rising contact hitters, but none yet with similar power as this year's seniors.

"The seniors have laid the foundation for these young kids, and they need to follow with the same worth ethic and go through the motions," Skultety said. "They have to learn what it takes to compete for the (Mid Penn) Commonwealth title and a district title, and step up next year.

"We have good freshman and sophomore classes," Skultety said. "Young kids are hungry and they're coachable, so hopefully they will adapt and buy into the system."

Pitching: For two years, Chambersburg has been a serious threat because of its deep pitching rotation, littered with Division I talent. However, none of its four pitchers will be returning to the diamond next year.

Easily the biggest question mark for Chambersburg softball next season will be who rise as the team's starting pitcher.

"We have some young talent, there's no question about it, but we have to find some pitching," Skultety said. "The pitching we had the last two years was fantastic because if one didn't have it, I could go to someone else, but right now we have no pitchers with varsity experience."