McConnellsburg has best start since 2008

With a shutout of Southern Fulton, the Lady Spartans remain undefeated with an 8-0 overall record

McConnellsburg has best start since 2008

McConnellsburg earned yet another straight-set victory, this time against Southern Fulton, to match its best start since 2008.

Early in the third set, a point against Southern Fulton looked completely lost for McConnellsburg.

A misplayed bump was headed way out of bounds, but the Spartans' Lexi Lupey wasn't giving up that easily. She chased it down and laid out on the baseline to dig it up to Katelyn Truax, who put it over the net and unexpectedly won the point.

Southern Fulton's Olivia Mottern bumps the ball during a match against McConnellsburg earlier this season. Mottern joined the Indians this year after not playing volleyball since seventh grade. Noelle Haro-Gomez, GameTimePA.com
Fullscreen

It wasn't exactly a turning point, but it was a defining moment for McConnellsburg, which secured a 3-0 win in Sideling Hill League/Inter-County Conference play Thursday night.

"I just think you can never let the ball hit the ground; you have to give it your all," Lupey said. "Even if it flies, just get a hand on it, get it up. It was awesome (to win that point); I didn't think that was going to happen, but that was great."

Early in the season, with just two wins under its belt, McConnellsburg had a tough time at its annual Lady Spartan Tournament. But since then, the team has turned a corner and never looked back.

"I think we played the best team that was there by far (Broadfording) first, and they took it to us pretty hard," Spartan coach Heidi Johnston said. "We just never rebounded well from that at all. We never played good ball, but it was good for us in a way, because since then, we've been playing way better with more confidence and excitement."

The opening two sets of Thursday's match were walks in the park for the Spartans, who defeated the Indians (3-7, 2-3 SHL/ICC), 25-14 and 25-7. But then SF put on the pressure and even led 16-10 in the third set before Johnston called timeout.

"She told us we just need to be more consistent, and we have to get back to the basics," Bridgette Ritchey said. "We worked back, and we got it."

SF senior Olivia Mottern said, "We actually did completely change our formation in the third. We ended up pulling Drew (Gordon) to be a full-time setter, and I think that really helped having Tiara (Bard) only on defense because there wasn't as much moving around. That adjustment did help us a lot." 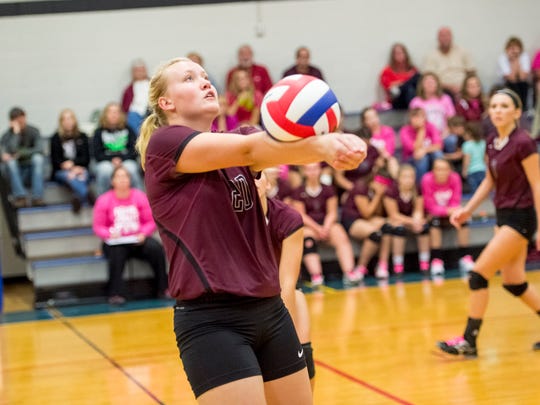 Southern Fulton's Olivia Mottern bumps the ball during a match against McConnellsburg earlier this season. Mottern joined the Indians this year after not playing volleyball since seventh grade. (Photo: Noelle Haro-Gomez, GameTimePA.com)

Not quite enough, though, as the Spartans won the final set, 25-22.

One of the best things McConnellsburg has going for it is its well-balanced offense. Ritchey led the charge against SF with 11 kills, while Kacey Hann had four, and Truax and Carly Swope each finished with three. Even setter Lindsey Randler was credited with a pair of kills in addition to her 17 assists.

"(Our offensive weapons) help me out a lot," Randler said. "It's a lot harder when you have people that don't really know what they're doing, but these guys (Ritchey and Swope) both have just as much experience as I do, so it helps out a lot."

Ritchey said, "We just kind of mix it up and try to give everyone a chance. If it's coming from all different places, the other team is not going to be able to cover everything."

Nearing the halfway point of the season, McConnellsburg has beaten all but one of its Sideling Hill League opponents once, and the target on its back grows ever bigger.

"We just need to keep pushing and remember our goal in the end," Swope said. "Even though other teams have gotten out of the district (into a new classification), we still need to push just like we would play those tougher teams."