Just before the Christmas holiday, the Fannett-Metal community was struck with a tragedy.

Fannett-Metal's girls basketball team wore green during a game on Jan. 5 in honor of classmate Austin Ray Gelwicks, who died on Dec. 21, 2016. Pictured is coach Todd Best during a huddle against McConnellsburg.(Photo: Noelle Haro-Gomez, GameTimePA.com)

Just before the Christmas holiday, the Fannett-Metal community was struck with a tragedy.

On Dec. 21, 2016, Austin Ray Gelwicks, a senior at F-M, passed away as a result of injuries sustained in a motor vehicle accident.

The Lady Tigers girls basketball team dedicated its game on Jan. 5 to Gelwicks, decking the gymnasium out in green in honor of Gelwicks' 69 G car. F-M coach Todd Best sported a green shirt, the girls wore green warmup shirts and hairbands, and green balloons were pinned throughout the gym and cafeteria.

More than $200 was raised at the game and given to Gelwicks' family during a halftime ceremony.

EMERGING LEADER: With a senior-laden team such as McConnellsburg, it can be easy for a junior to get lost in the shuffle. 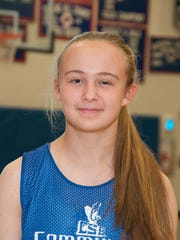 But that hasn't been a problem for Kellyn Perry, who is the Lady Spartans' only non-senior starter. Perry, who averaged just 4.4 points per game last year, has nearly doubled that at 7.7 ppg this season.

Perry has put up back-to-back double-digit performances, including 13 points against Chestnut Ridge and 11 versus Fannett-Metal.

"She's going to have to be one of our leaders next season," McConnellsburg coach Brent Seville said. "This group we have this year is pretty special, and they're going to be gone. She's going to be our next leader, and I think she's slowly getting there."

G-A RISING: At the beginning of the season there was much speculation about the competition in the Mid Penn Colonial Division. With three area girls basketball teams showing promise early, the thought was that this year's race for the MPC crown would be a close one.

That maybe the three-year reigning champions Greencastle-Antrim could meet its match in the division this season.

But now, about midway through the season, the Blue Devils have proven that they are not going to go away without a fight.

"I think Waynesboro might be our biggest competition in the Colonial Division," Greencastle senior Morgan Wagaman said last week.

But after a 50-29 handling of the Maidens on Tuesday, and a 50-39 victory over Shippensburg, another top contender in the division at the start of the season, Greencastle has emerged as the frontrunner in the Colonial with a 6-0 record.

"Trending is a big word now, and it seems like we are trending in the right direction," Greencastle coach Mike Rhine said. "We watch film every night and we seem like we know what is right and what is wrong.

"Two years ago, the district championship team, I don't know if we ever won a game scoring only 38 points, but I don't care if that's the case this year, I'm OK with a 38-36 win; it's a transition year. We focus on defense every single day and I feel like we are buying in and understanding and the kids are having fun. And if that's the case, mission accomplished. I hope we win, but they are loving what they are doing and flying all over the court."

Already inked into the 1,000-point club, Southern Fulton's Olivia Mottern and Greencastle-Antrim's Jenay Faulkner are each gunning for school records. Mottern is just 125 points away from breaking Macey Hollenshead's all-time girls scoring record as of Wednesday, and Faulkner is inching closer to Dave Hann's school scoring record with just 60 points to go.

McConnellsburg's Bronwyne Mellott is 380 points away from breaking the Spartans' all-time scoring record, and she is quickly moving her way into the 2,000-point club. She is just 99 points from the 2,000-point milestone.