Community rallies around JB after loss to 'Boro

Community rallies around JB after loss to 'Boro 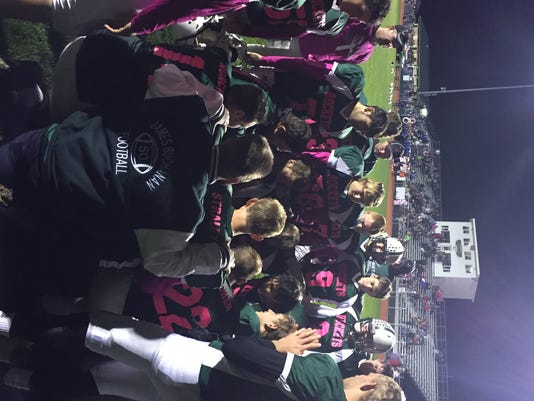 Eight punts on nine drives, and the other a turnover on downs.

If nothing else, Friday night's 38-0 loss to Waynesboro in Mid Penn Colonial Division action was a prime example of why James Buchanan made the recent decision to request a withdrawal from its Mid Penn Conference football schedule.

"Waynesboro and the teams we're facing, we just can't man up - not just numbers-wise, but size-wise and speed-wise," said JB coach Andy Stoner, who played for the Rockets. "We're trying to get more interest, get more kids out to get things going in the right direction. We're all working way too hard to see a score of 60-10, so we're going to see what we can do with new possibilities if it happens."

The proposal made to the Mid Penn Board of Directors will be voted upon by the general membership Wednesday.

While the reaction may have been mixed around Franklin County when the announcement was made Thursday, the community banded together to support the Rockets (0-9, 0-6 MPC) in their final home game of the season.

"I think our goal is long-term," said Vicki Ellis, mother of junior Jackson and wife of assistant coach Jason. "It's to be a winning team, raise our morale and just the overall attitude and get more kids back. We can always go back to the Colonial Division once we re-establish the program. We need to look at the long-term goal down the road."

Alfred Bendell, a 2014 JB graduate, former football player and brother of current player Clayton, said, "I think it's a good choice for them to move out because a lot of teams we play, we just can't compete with them. I think it'll give us a chance to build our confidence back up and be able to play better."

After 21 years of losing records and the Rockets closing in on another winless season, it's clearly time for something to change at James Buchanan. Most programs that struggle with years of sub-par play call for a "culture change," and that's just what JB seems to be going for.

"Right now, we're struggling with numbers and getting athletes on the field," Stoner said. "We're hopeful that the possibility of something different in the future is going to generate what really happened at Waynesboro (which had 22 consecutive losing records before going at least 6-4 for the last three years).

"Four years ago, we beat Waynesboro, then they got that coach from Tulsa (Brennan Marion). He shook things up, got kids interested and got kids to believe. They've had a winning record since, and their new head coach has built off what they did three years ago. Winning brought that on, and we're hoping that what we're looking at will do the same thing."

And for those who think JB is just taking the easy way out?

"These kids are definitely not quitters," said Jane Shughart, mother of junior Sean Bankson. "I haven't seen those kids quit; they give it their all. They have to play every side - offense, defense and special teams - they don't get breaks. They are not quitters."

NOTES: Waynesboro's offense was led by Brady Beckner, who finished with 131 yards and two rushing touchdowns ... Beckner also hauled in a 23-yard touchdown reception from Brady Riddell ... Forrest Rhyne returned a punt 48 yards for a score.