For the third year in a row, Southern Fulton's boys cross country earned the title of District 5 Cross Country champions. 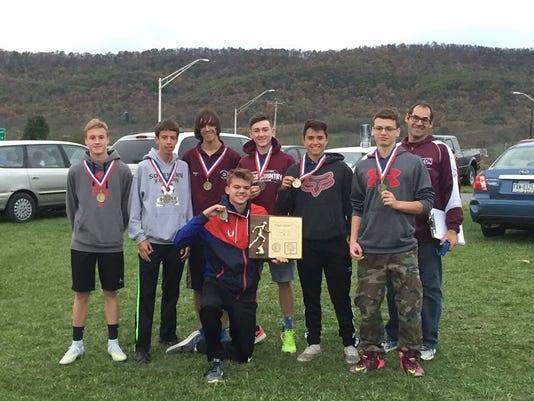 But this year, the Indians were joined by their female teammates on the medal stand, as both Southern Fulton squads took first in the team races Wednesday.

"Our kids were just ecstatic," SF coach Joe Hollenshead said. "It's something we set as our goal from Day 1, and the seniors have really emphasized that and talked about it all year. They have really motivated the younger kids."

Chase Varner earned the top spot of the day for either team, placing third in Class 2A with a time of 18:26. Five of SF's runners finished in the top 10 on the boys side. Southern Fulton finished with 23 points - next-best Winder earned 54 team points.

"They all did really well, but Dylan Ensor, he was injured during the first race of the season," Hollenshead said. "He's battled through it, and his last two races have just been superb. We just have a super group of boys, and our whole team has become like a family. They push each other and run for each other more than for themselves."

The girls team didn't have nearly as much competition, having to edge only Johnstown Christian for the team title. It did just that - Southern Fulton finished with 20 points, compared to Johnstown's 39.

Elizabeth Flaherty was the top runner for the Indians, placing sixth in 23:24. Maddie Baker was just a second behind for seventh place. The next three SF runners crossed the finish line within eight seconds of each other. Emily Bradshaw (24:21), Lindsey Hollenshead (24:28) and Mary Dudich (24:29) placed 10th, 11th and 12th, respectively.

"We knew going into the season that we did not have any really fast runners," Joe Hollenshead said. "But we knew we could do it as a team. In our dual meets, we didn't beat anybody real easily, our top five through seven girls have been doing it as team, and they did that again tonight."