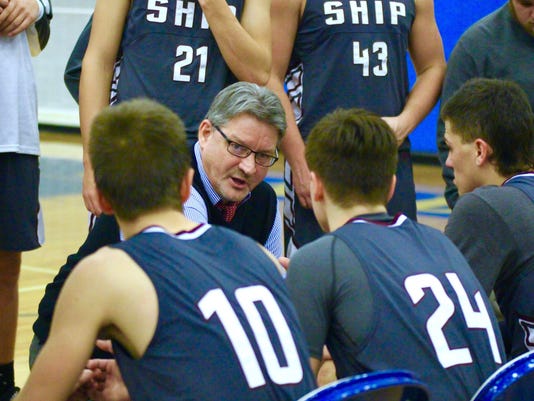 Shippensburg coach Ray Staver talks with his team during a timeout earlier this season. A win against Boiling Springs on Friday night gave Staver his 350th win at Shippensburg.(Photo: Courtesy, For GameTimePA.com)

Win No. 350 was fairly stress-free for Ray Staver.

So was the accomplishment of reaching a major milestone for Greencastle-Antrim senior Jenay Faulkner.

In an eventful Friday night for Franklin County basketball, Staver moved his record at Shippensburg to 350-261 (.573) and Faulkner scored 25 points to become her school's all-time leading scorer. She now has 1,618 points to slide past Dave Hann's mark of 1,612.

Shippensburg scored a 69-42 victory over Boiling Springs, taking a 24-10 lead after one quarter and pulling away from there.

"I didn't even know about it until afterward," Staver said. "It just means I've been around for a long time (25th year), and I've had a lot of good players and a lot of very good teams. And it also means doing a lot of film study and putting together scouting reports."

"We hadn't played in a week and I think we were fresh," Staver said. "We got some scoring from other guys and Brady (Kuhn) had his best game of the year ... he boarded well."

Staver said it's always a decision year to year in terms of when he'll decide to stop coaching.

"I still have the passion, even though I did take a couple of breaks from coaching," he said. "I have coaching in my blood - I think I knew even as far back as junior high that I wanted to be a coach."

TO THE TOP OF THE LIST: By the time she finishes her senior year and the lists of top scorers in the Greencastle gym have been updated, Jenay Faulkner will stand alone as the Blue Devils' best scorer.

She started her career with plenty of fanfare and has not disappointed.

Friday, in a 60-31 win over Northern York, Faulkner went flying past the last milestone available to her. She needed 19 points to tie Hann, which she did when she scored on an acrobatic putback in the fourth quarter.

The next time the Blue Devils went on offense, Faulkner was fouled. She missed her first shot, but sank the second to give her the record.

"We wanted it to happen tonight and get it over with," G-A coach Mike Rhine said. "I mentioned it once before the game, but we didn't make a big deal about it. Jenay would tell you that the win was more important."

Northern broke ahead early, but the Devils (12-3, 8-0 MPC) used a full-court press to disrupt the Polar Bears.

"Northern really brought it early," Rhine said. "But we woke up and pressed and got a lot of runouts, and it became a fun game."

When the big foul shot dropped through, the game was stopped and Faulkner gave a hug to her coach and teammates and was presented the game ball.