James Buchanan's Jared Pine has been selected as the 2017 P.O. Baseball Player of the Year. Courtesy, Kelly Sanchez
Fullscreen

James Buchanan's Jared Pine has been selected as the 2017 P.O. Baseball Player of the Year. Lindsey Smith, Lindsey Smith/GameTimePA.com
Fullscreen

James Buchanan's Jared Pine has been selected as the 2017 P.O. Baseball Player of the Year. Lindsey Smith
Fullscreen

James Buchanan's Jared Pine has been selected as the 2017 P.O. Baseball Player of the Year. Lindsey Smith, GameTimePA.com
Fullscreen

James Buchanan's Jared Pine has been selected as the 2017 P.O. Baseball Player of the Year. Lindsey Smith, GameTimePA.com
Fullscreen

James Buchanan's Jared Pine has been selected as the 2017 P.O. Baseball Player of the Year. Andy Grosh, GameTimePA.com
Fullscreen 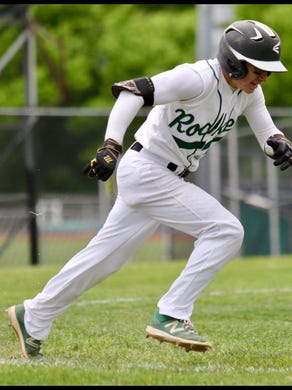 James Buchanan's Jared Pine has been selected as the 2017 P.O. Baseball Player of the Year. Andy Grosh, GameTimePA.com
Fullscreen

James Buchanan's Jared Pine has been selected as the 2017 P.O. Baseball Player of the Year.(Photo: Andy Grosh, GameTimePA.com)Buy Photo

Jared Pine said most people underestimate his power at the plate - considering he's only 5-foot-8.

Pine led Franklin County in nearly every category on the way to helping James Buchanan complete a historic season, but that wasn't enough for Pine, who wanted to make this year something special.

"You're going to laugh, but I wanted to lead the state in every offensive category," Pine said. "I like to set my goals high."

Well, he was pretty close.

Finishing his senior season with an unbelievable .564 batting average, and a .927 slugging percentage, Pine had the third-best average in Pennsylvania, and slugged himself to No. 2 in the state, according to MaxPreps.

He is the Public Opinion Baseball Player of the Year.

"He was on a different level," James Buchanan coach Dave Sanchez said. "Once again the bar was high, and he succeeded. He had one of the best high school seasons a kid could have."

After earning an impressive batting average last season (.433), Pine continued to improve with the help of Merle Guyer, a hitting instructor and coach with the Mid Atlantic Red Sox.

"Guyer did a ton of work with me most weekends, he was a big part of my success," Pine said, "and the other big part was coach Sanchez doing work with us in the fall."

"I’ve seen a lot of other guys with high averages, but a lot of hits were from bunts or ground balls," Sanchez said. "But all of Jared's hits were a majority really well-hit balls. He had a ton of extra base hits for us, and it’s a great thing to watch a kid like that dominate almost every pitcher we saw this year."

Pine led the team with 22 RBIs and racked up 13 extra base hits. He struck out just twice even though he had to adjust to pitchers throwing off speed nearly every time he was at bat.

"I knew that I would probably be the guy that team’s tried to avoid, so I worked hard hitting the off speed stuff and I think I did a fairly exceptional job doing that this year," Pine said. "There were a few games that I didn't see a fastball the whole game, so I really focused on hitting anything that came my way."

"He got pitched around a lot, and was pitched differently to, but he was able to adjust," Sanchez said. "And that’s not an easy thing when teams start game planning for you, but even under those circumstances he had an unbelievable year."

Pine also dominated the field as a near-perfect shortstop and a shut-down relief pitcher for the Rockets.

He had just one error at short this season, which Pine jokingly bet was a throwing error.

"Last year we scored a good bit of runs, but we also gave up a ton of runs," Pine said. "Playing this year, we had a lot of really tight ball games, and those wins really come down to making those plays in the infield. I know Jake (Dorty), Remi (Spoonhour), Hunter (Reath) and Zane (Bray), all made really clutch plays when we needed them. We knew our defense was going to be good, and repetition and situational drills in practice really helped with that."

Just four years after breaking his throwing shoulder while participating in middle school wrestling, Pine threw his first high school start against McConnellsburg early in the season. The result? A one-hit shutout.

From there, Pine became the team's shut-down closer, and his stats remained outstanding.

Although he pitched just 12 innings, Pine held a stellar 0.60 ERA, allowing just one hit, and racked up 14 strikeouts.

"Jared was the kind of kid that you wanted to give the ball to," Sanchez said. "He was the one who wanted to be in that tough situation and he wasn’t scared of the pressure, he embraced it. When you have a kid like that in your back pocket when you need that one out, he got it every time we needed it."

Future plans: Pine is signed to play at Frederick Community College where he will get his associates degree and after two years will explore the possibility of continuing his athletic career elsewhere.

Other Interests: He also played basketball for the Rockets

Biggest athletic influence: “I’d have to say my family, both my parents were into sports the whole way through school, my grandparents, everyone in our family is into some sort of sport.”

Pregame ritual: The last two seasons Pine throws with Jake Dorty to warm up between games.

Statistics: Pine led the area in nearly every offensive category, hitting a staggering .564, with 22 RBIs. He also slugged .927 with 13 extra-base hits. He was also incredibly solid in the field with just one error at shortstop. In addition to his work in the field and at the plate, Pine also threw 11.2 innings and earned a 0.60 ERA with 15 strikeouts.