Myles Gayman examines MLB players, takes something from every coach to improve his own pitching.

This year, Myles Gayman was Greencastle-Antrim's not-so-secret weapon on the mound. His well executed pitches were nearly impossible for batters to hit, giving him the area's best ERA at 0.34. Want to know how he does it? Check out this video. 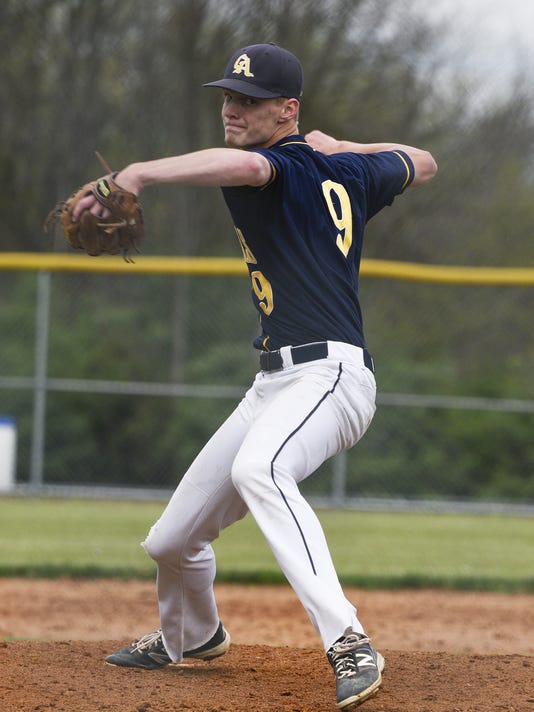 Greencastle-Antrim's Myles Gayman began turning heads on the mound as a freshman. Now four years later, he has emerged as one of the top pitchers in District 3.(Photo: Noelle Haro-Gomez, GameTimePA.co)

Greencastle-Antrim’s not-so-secret weapon Myles Gayman can seemingly do it all.

He led the team in batting average and RBIs, and was a solid defender at shortstop. But the most dazzling entry on his baseball resume is his repertoire of pitches that was nearly impossible for District 3 batters to figure out.

Growing up around the diamond, Gayman was a melting pot of different styles and techniques. He learned not just from various coaches but also from some of his idols under ballpark lights.

“As a young kid, having the right coaches around me really helped,” Gayman said. “Every coach I’ve ever been to I take something from and make it my own. I like to look at Major League pitchers and critique their mechanics and use some of their stuff as my own.”

But it wasn’t until his sophomore year at Greencastle that Gayman began to emerge as a dominant force on the mound.

“My 10th-grade year things really started to turn around for me,” Gayman said. “My freshman year I was a two-way player, but I knew I wanted to play baseball at the next level. After I did some conditioning and saw a big jump in velocity, it really made me realize that pitching is probably the best path I was going to take.”

In the span of four years, Gayman went from throwing low-80s to the 90s with command that could throw off the area’s best hitters, despite being sidelined for most of his junior year.

After throwing just 25 innings, Gayman said he did not lose any velocity or command thanks to extensive work and rehab in the offseason. Gayman began working out two months before pitchers usually being throwing to ensure he had the endurance, speed and command needed to return to the top of the Greencastle rotation.

"I needed more time to get my arm strength back up, knowing it was a big season for me being my last year here," Gayman said. "I think the first game of the season my arm was the most live, and being on the mound for the first time in forever really got my hyped up. As my arm strength got better, by the end of the year I was holding my max velocity through seven innings."

Gayman will continue his playing career at Penn State. Although he was recruited as a pitcher, Gayman has joked with the Penn State coaching staff about potentially letting him into the batting order as well. As a senior, Myles batted .471.